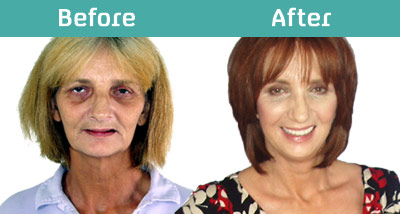 I watched my first ever episode of 10 Years Younger on Channel 4 the other night. Now, I know the show's been around for a while and I'm not entirely sure how I never managed to catch it before now, but a couple of things dawned on me while watching it.

1. Nicky Hambleton-Jones is not the nasty beeatch I thought she would be! I mean, don't get me wrong, empathetic agony aunt she ain't and she looked incredibly uncomfortable (and a bit exasperated) when makeover candidate Pandora got a little teary-eyed at the prospect of having the last of her teeth out to make way for a new set of gnashers, but she certainly wasn't cruel. Just straight-talkin' and brutally honest. And - dare I say it? - less condescending than Trinny and Susannah.

2. Cosmetic surgery makes for very difficult telly watching (looking at the surgery scenes through my fingers while wincing and squeaking, so I was) but holy crap the results can be truly amazing. The "Before" and "After" shots up there actually don't do the transformation justice, as anyone who has seen this particular episode will attest. Now, we've all seen Extreme Makeover and The Swan and similar shows where the object seems to be to transform any woman into a Barbie-esque doll-lady. They all end up looking eerily similar in the end, and you can almost always tell that they've had work done. However, it looks (from the one episode I saw!) like the emphasis on 10 Years Younger is making participants the best them that they can be, taking inspiration from old photos before the decay set in. And in the end, they look like an alternative version of themselves (or, in this woman Pandora's case, like their own daughters), like the way the would have aged without the sunbed addiction or the 40-a-day fag habit.

Watching the show and the surgery scenes that made my stomach flip-flop, I got to wondering, so I did. How many of you ladies have had - or would contemplate - some form of cosmetic enhancement above and beyond the odd facial or spray-on tan? Have you gone ahead and bitten the Botox bullet? Had a boob job? A spot of Lipo? Rhinoplasty? Otoplasty? (That's an ear job, by the way.) Were you delira with how it turned out? And - did anyone cop what you'd had done right off the bat or did they all just wonder if you'd done something different with your hair?