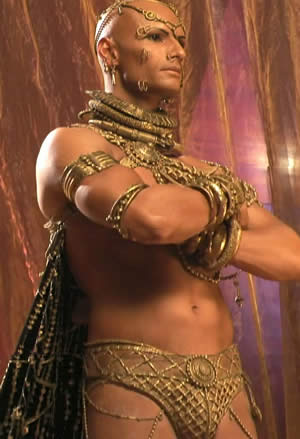 I went to see 300 last night, the epic tale of the tiny Spartan band of warriors who challanged the might of the Persian empire.

While six packs and leather codpieces made up the Spartan dress de jour, the defining style moment of the film was undeniably Xerxes, the Persian god-king.

Every piercing imaginable adorned his face - nose, ears, eyebrows, cheeks - you name it, he had it. Dripping in gold, braceleted and neckleted, headbanded and belted it was little wonder he had to be carried around everywhere on the biggest throne ever seen. He needed to wear little else. Apart from a big gold codpiece of course.

His makeup was spectacular. As if predicting this season's trend for metallics, he had gorgeous golden blusher, fantastic golden eyelids and shimmering metallic lips. And his nails! Superbly long, they were painted a rich, er, gold.

Not a man to do things by half, our Xerxes. Fabulous. And it worked.