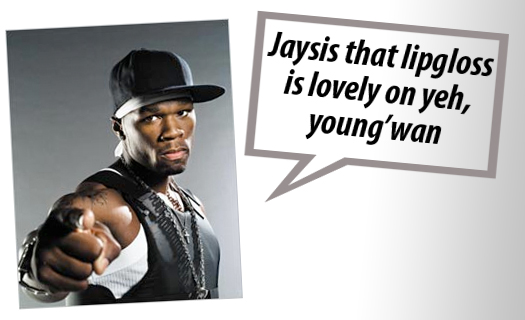 He's into having sex, he's not into making love. And now it seems he's also into makeup.

When the news broke about Fiddys new cosmetics launch it was all I could do to stop snorting my Lyons down my nose. An uber butch, supplement enhanced, male grooming line has been promised. And lets be very clear here. These cosmetics will be hard. The moisturiser will be macho and rouge will be ripped.

But 50 Cent (or 50 pee as we affectionately call him), is a veritable cash cow and it seems there's nothing he won't do to make some (more) millions. He's a brand don't ya know. And his manager has formed a beauty company - Lighthouse Beauty - to capitalise on the untold wealth Fifty could be making from this lucrative market.

Don't forget he wants to get rich or die tryin and seeing as his 'healthy' water line was loaded with sugar I don't hold out much hope for this new venture.

Is this the most cynical move the beauty industry has seen lately? And will your bloke be sipping Barcardi in da club while wearing a facefull of Fiddy powder?