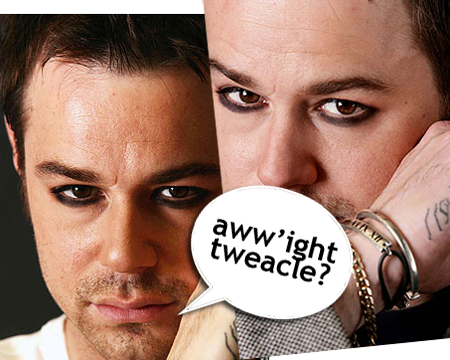 Ah Jaysis Danny, you've been veering into comedy territory for quite some time, but your latest stunt has taken the biscuit. Having a fondness for London types with friendly faces who wear trendy sportswear and slouchy-arsed jeans, I've been a bit smitten with Danny Dyer since he was in the Football Factory. I even stayed - but I was wavering a little - with him through The Business and Severance, both of which were really not that good At All.

Then came The Real Football Factories and Danny Dyer's Deadliest Men, two pretty dyer (see what I did there?) series' in which Danny's hilarious cockernee-isms came to the fore as he ran like a girl from Dutch football hooligans and tried to get down with some 'ard nut SAS dudes who go about popping bad guys. "OID've put two inizzz cannnnnistAAAAH", he declared, in reference to shooting someone in the head, twice. Me and himself fell off the couch laughing at that one. Then hastily switched channels. I felt it was probably pretty much over between me and Mr Dyer at that point.

But it's gotten worse. Not content with making a prize plum out of himself on digital TV, I now see that he actually really IS willing to do almost anything to maintain a modicum of fame.  Like adorn his canister with eye liner and pose in a mean and moody fashion for The Sun, for a story on the rise of male cosmetics. "I look after my skin", swaggers Danny.  "My face is my tool so I have to. I always moisturise and I’m not against a touch of fake tan".

"I know a lot of tough guys who, when I meet them, it’s not unusual for us to discuss which facials, moisturiser and eyebrow-plucking techniques we use", he continued, hammering even more nails into the coffin of his rapidly decreasing attractiveness.

However, he hasn't lost the run of himself entirely: “Overall, I really like the look", he said, hastily adding,  "in its place, of course. I won’t be turning up to West Ham in it on a Saturday morning, that’s for sure".