Don't spray more and get more? Lay off the Lynx guys

Recent "research" has shown that's it the smell of a man sweatin' that gets the female populations pulse  a racin' and leads to longer term bonding between couples.

Cuddling up after sex under his armpit, snuggling up on the settee with your nose in close proximity again to his armpit and going for rosemantic strolls with his arm wrapped snugly around your shoulder are all typical behaviour traits of new couples and mean that you're getting a blast of manly pheromones at every opportunity. 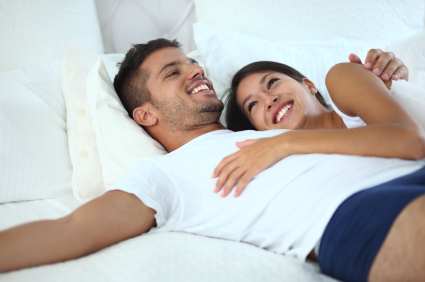 The longer established a couple is the less this kind of carry on goes on unfortunately.  Yeah you're still watching telly together, but you mightn't feel the need to wrap yourself around one another.  Sadly it's also likely that you won't be having sex five times a night anymore so the opportunity to get a good whiff of that armpit diminishes.

And apparently the less we fickle women come into contact with the male scent in a physical sense, the less bonding to him we experience and the less close we feel.

Yeah okay you don't want your man smelling like BO obviously - but do you want him to be smelling overpoweringly of chemicals and fakely "manly" scent?

Don't you want him to be smelling of himself - of a real bloke, nice and clean from his daily shower and with a normal dose of deodorant?  Not an overpowering aftershave/deodorant stink that could knock you senseless at five paces?

Agree with this theory?  Let us know in the comments!