Fitness Journey: Can we survive the ultimate workout challenge?

Over the past two years, I've been on a life changing journey of discovering what works for me when it comes to health and fitness. In the process I have lost five stone of fat, gained muscle and definition, and even more importantly, I have finally found a love for exercise, something that I have struggled with my entire life.

The main reason that I now embrace fitness is for mental health purposes. It has helped me in every aspect of my life: from dealing with work-related stress to helping me cope with arthritis, and most recently it is helping me to get though a painful breakup. I will hold my hands up and say yes, I have become one of those annoying social media fitness fans (#fitfam #eatclean). But I don't post to irritate anyone; I post to speak to my brethren, the other lunatics out there who, like me, love this stuff. It's how we motivate each other and drive ourselves on.

Two years ago I couldn't have made it though a HIIT session (in fact I almost threw up in my first one), but now, while it still hurts, I relish them, mostly for the high and sense of accomplishment that I feel afterwards. So, when an invite crossed my desk to join Under Armour Ireland for a special once off Armour Camp in Dublin, I thought, Sure! Why not? I've got this. 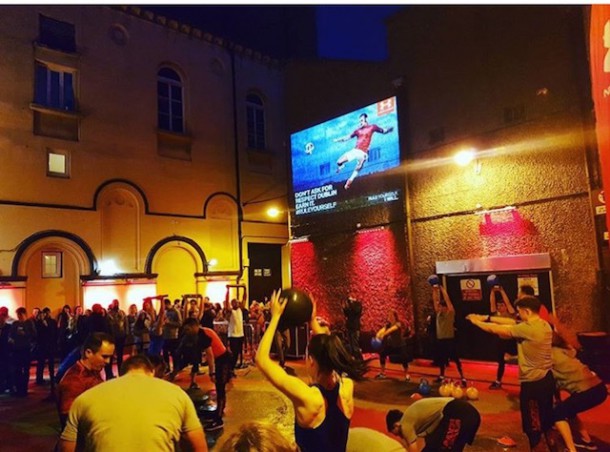 My new Coolswitch gear had arrived that day (which uses the same technology as NASA spacesuits if you don't mind!), and so I arrived to the agreed location (down the side of the Olympia Theatre) feeling excited and ready to go. I was greeted by some very fit looking and enthusiastic Under Armour representatives, as well as a huge queue of people waiting to go into a gig. My heart sank, were we to have an audience?! Then as the other participants arrived, I suddenly realised that I was potentially way out of my depth. Everyone seemed to be either a personal trainer, or a gym instructor or some kind of athlete (apart from he of Snap Chat fame, Mr James Kavanagh - but he was there for celebrity status and I wasn't in that bracket!). I started to panic and seriously contemplated coming up with an excuse and sloping off quietly down the back alley.

But then the determined voice in my head kicked in, and I thought, feck it; I CAN do this and I WILL do this. This is my 'Cliff Year' (a phrase coined by a good friend), which is all about trying new things and taking risks and seeing where that leads me. What was the worst that could happen?

Personal trainer John Belton led the group with two able assistants. I realised pretty quickly that this was a military type work out - lots of 'Hoo-rahs!' and shouting. We were put through our paces across five stations, as music blared out, videos were projected onto the wall, and half of the Olympia audience sipped pints, smoked and roared us on. Within minutes I was in too much pain to care about how awful I looked anymore, as the crowd snapped away on their phones.

The guys on my team were a great support as they urged me on, despite the fact that I couldn't keep up with their pace, and when it was finally over, I felt a huge sense of achievement.  I had done it.  Maybe not in style, but I hadn't let myself down either. I had kept up and I had broken through my own fear barrier.

The whole point of the camp was to promote Under Armour's #RuleYourself global marketing initiative.  Its tag line is, 'It's What You Do in the Dark That Puts You in the Light'.  The campaign highlights the sacrifices that athletes make and the elation that they feel when they dedicate themselves to their sport. While I cannot call myself an athlete, I do understand what that phrase means. I no longer hide myself; whether that be under baggy clothes or by staying at home. I put the work in when no one is looking or cares, I make sacrifices, and ultimately I now walk in the light.  Because of that, I fully support this campaign.

Whether you're an athlete or not, surely we can all celebrate the people that drive themselves to great things, for no other reason than because a voice inside is saying, I WILL.