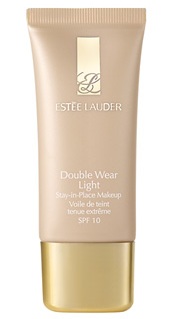 Like most of you gals who have tried the original version of Estee Lauder's Double Wear liquid foundation, I absolutely adored its bomb-proof-ness... but there was just no getting away from the fact that it was inclined to be a wee bit heavy and more than a little bit drying. So I took to scouting around for a replacement, flitting from MAC to Max Factor, from Bobbi Brown to Bourjois, from Chanel to... well, not Cover Girl, but you see where I'm going with this.

Anyway. I never did find a substitute that I could say, hand on heart, I was completely happy with - until Double Wear Light arrived into my life. (Light of my life, see? See? Ah I'm wasted here.) While it gives all the long-lasting wear of the original formulation, the coverage is more sheer and that claustrophobic, mask-like, eek-skin-can't-breathe sensation is totally absent. It gives a very natural semi-matte fresh finish and doesn't break down, fade, change colour or turn patchy as the day goes on.

My one gripe with Double Wear Light is the frankly rubbish selection of shades that it's available in. Now, Estee Lauder's foundations are offered in six colour intensities from 1 (lightest) to 6 (darkest), with three or even four shade variations generally available in each intensity. However, this isn't the case with DW Light; it's only offered in the basic six intensities with no further breakdown of shades. Of these, only the two lightest are really going to be even nearly suitable for typical Irish skintones. Intensity 1.0 was too light for me, but Intensity 2.0 is fractionally too dark.

Bah. I should have known there'd be some catch...