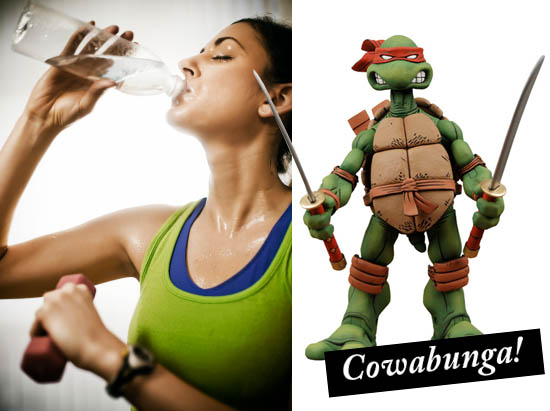 Having heard mutterings around Twitter about "shredding" a couple of weeks ago, I did wonder if there'd been a sudden resurgence of interest in Teenage Mutant Ninja Turtles and their arch-enemy Shredder. Hey, I love a bit of '80s nostalgia as much as the next rehabilitated scrunchie wearer, so it didn't seem beyond the bounds of possibility that TMNT were back with a bang. Either that or there was some big social media campaign pushing Shredded Wheat going on.

Eh, yeah. Obviously neither was the case, and I am an idiot.

Once I - eventually, ehem - figured out that the shredding in question related to Jillian Michaels 30 Day Shred fitness DVD and heard people raving about the results they were getting with it, I skedaddled on over to Play.com and ordered myself a copy. The eminently sensible reasoning behind the order was that I might actually exercise if I could just do it at home, without having to venture out into the cold/wet/bloke-filled weights section of the gym.

€8.49 of my Eurobux and a couple of days later, it was time for my first session with Jillian. I set up in the sitting room and listened to the introductory chat, wherein Jillian uttered something along the lines of "let's get started! Go team! What's great about this workout is that you don't need any special equipment. Well, other than a set of dumbbells and an exercise mat, of course! But sure everyone has those things lying around the house, right?"

I pressed pause and hunted through the kitchen presses for something that would suffice as hand weights while wondering what the feck I could use in place of a yoga mat. I had to settle on a pair of Fruit Shoot kids' drinks from the fridge and a couple of towels.

Anyway, 20 minutes later, I had a very good understanding of why Ms. Michaels has earned the nickname "Kill Jill" from my Twitter friends. It was exactly what I felt like doing. Even the deceptively easy-seeming Level 1 had me in serious need of an immediate shower (and maybe a little lie down, not necessarily in that order) and I could feel the burn in my thighs and upper body for feckin' days afterwards.

The fact that it takes just 20 minutes a day and that you can do it at home definitely makes the 30 Day Shred seem super do-able, but I'm still on Level 1 and haven't been able to manage two days in a row yet. Yes, I am a wuss.

I'm also a bit wary about how tough the jumping jacks, skipping, and running on the spot might be on my poor knees - there's quite a lot of pounding your body weight off the floor involved here - so I'll be keeping a close eye to that.