If there was ever a phrase to strike fear into the heart of a hoarder like me, it’s spring cleaning. Particularly when such an event is way, way, waaay overdue in a little flat like ours.

I come out in palpitations when I think of the books and DVDs stacked on every available surface, the dusty photo frames, the bits of post all over the place and the shelves that have somehow ended up housing shoes, more post, cameras, more than a few bottles of nail polish and a burgeoning civilization of dust bunnies. 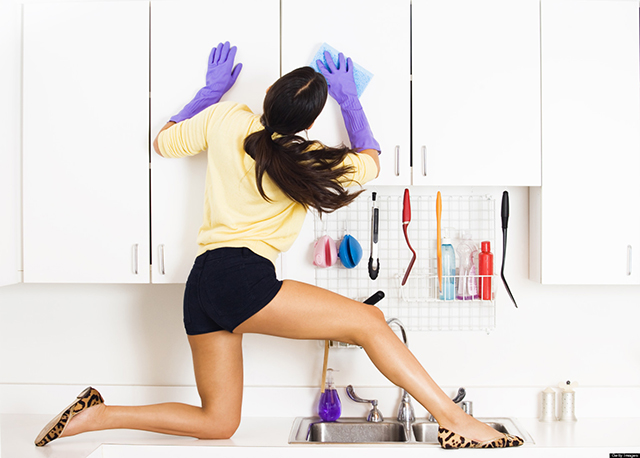 But ‘tis the season for massive cleaning. The time had come, a free Sunday had arrived and the living room/kitchen area was finally tackled. It was such a big job and it had been put off for so long. In fact, I realised that all the times  I THOUGHT I had cleaned and tidied up, I hadn’t really. I’d just gotten used to there being stuff everywhere and just worked around it.

Setting aside a day for a big clean up was the way to go for us. That and remembering to stay focused and not get distracted too much by books we’d forgotten we had or other jobs that needed doing. There was also that inevitable point where the room was actually worse than it was when we began and it seemed like the piles of crap had multiplied rather than decreased. But we powered through and the place is so tidy now it actually looks a bit weird and sort of empty. I’m just not used to being able to see the surface of the office desk over in the corner or the top of the bookshelf, but boy is it satisfying. 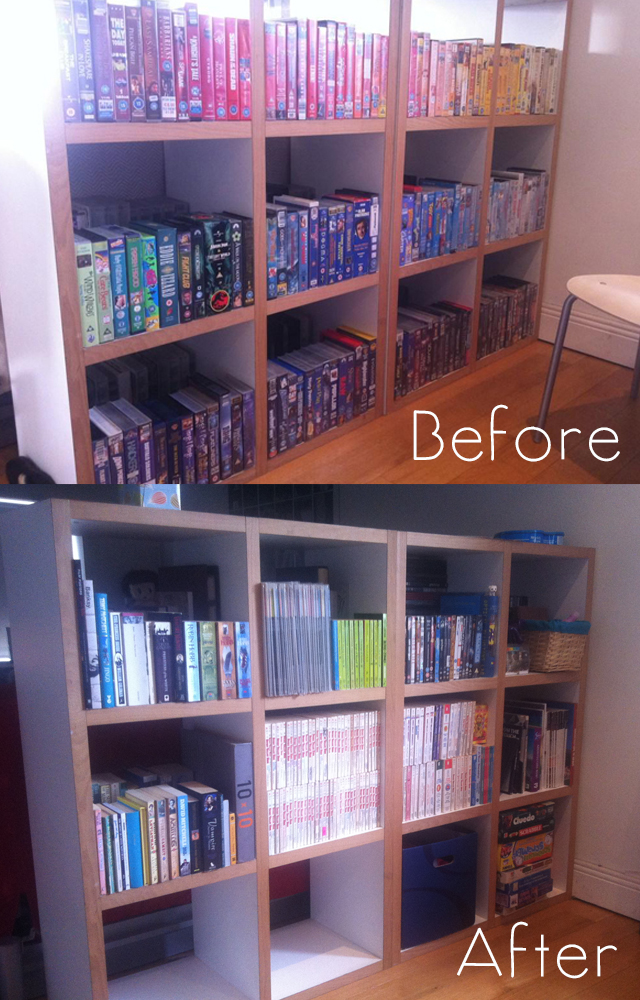 Full disclosure: The top photo was taken on an exceptionally tidy day. All kinds of crap had made its way into those shelves in the meantime.

The biggest thing was the decision to put away the hundreds of videotapes that had been arranged into a lovely rainbow gradient on the shelves in the middle of the room. It was time to put the space to more practical use, so the tapes were boxed and stored in the attic and the shelves were filled with books and all the other stuff that had been lying around with no real home to go to. There's even room to spare! This kind of thing was previously unheard of! (Plus now I get to show off my ridiculous collection of Sweet Valley High books.)

Important bits of paper were filed away, not-so-important bits like bank statements from four years ago were fed into the brand new shredder I bought just for the occasion (although while caught up in my shredding frenzy I managed to shred my prescription, which I don’t recommend). We even got a memo board so I wouldn’t forget about Tesco vouchers until they had expired, and the empty frames we had bought months ago were finally filled and hung on the wall.

It was a battle, but our big clean up eventually triumphed over the chaos. And hopefully all the reorganising will keep things from getting quite so bad in the future. If I haven’t just jinxed myself, that is.

So, have you been spring cleaning? Is your living room/nail polish collection due an overhaul and tidy up? Or are you one of those people who are just organised all year long?

Let’s discuss in the comments!