The Foundation Moustache: Facial Hair That's Invisible - UNTIL You Put Your Makeup On

Dark haired gals know all about the trials and tribulations of the lady tache. We can see it as er plain as the hair on our faces.

Bad and all as this is: at least we know about it and can do something about it if we want to.

But fair haired ladies don't have this luxury. You've might have fair, downy hair on your faces that's practically invisible UNTIL you apply too much foundation - and then bingo - you might be able to rival Chewbacca in the hairy face stakes. 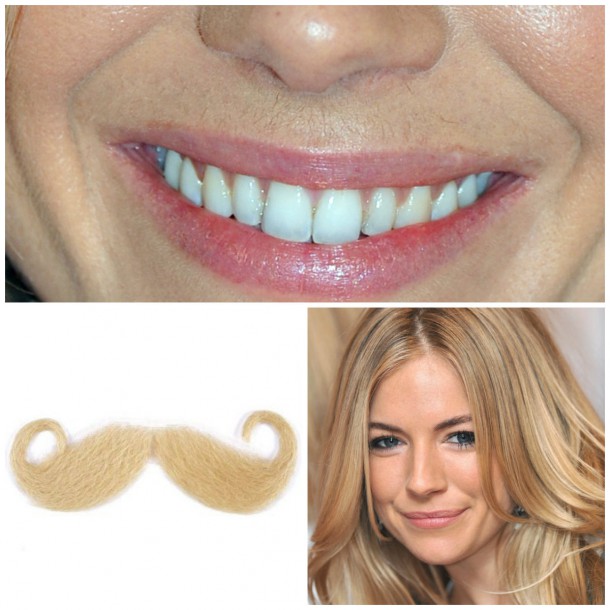 I remember clearly when Sienna Miller's film Mysteries of Pittsburg came out and  while critics not only tore shreds off the film, Sienna got nastily slated for her facial hair. It was actually disgusting the way people went on about it. So she has downy facial hair, she's on a screen twenty feet high which shows off every pore and hair on her face and this makes it okay for critics to write things like

“You know a movie’s got problems when the most memorable thing about it is Sienna’s moustache.  That growth above her lip is clearly visible in two scenes, once in profile.' (New York Post critic Lou Lumenick)

FOR CRYING OUT LOUD.  Sienna might not be top of everyones hit parade, but she doesn't deserve this kind of bitchy nonsense.

Foundation coats every teeny hair on your face and has the effect of bulking it up, making it stand out and if you add powder to the mix you've got a fluffy 3D version of your normal facial hair.

So what to do?  You could skip the foundation on your facial hair area altogether , use a mineral foundation or use liquid very very lightly.  This vid from makeup artist Wayne Goss has some good tips.

So what do you reckon?  Is this something that concerns you, or do you think it's creating a problem where none exists?

You can read more in today's Beauty Call in the Irish Times.