5 tips to survive a weekend trip to Penneys

There are few things that I both simultaneously love and hate more than a weekend trip to Penneys.

And you can see the word in that sentence that is the very probable source of my problem - weekend. Why would any sane human cross the threshold of the shopping mecca at the weekend? That's like walking into Coppers and then complaining that you didn't expect your evening to be a mélange of Wagon Wheel, boot cut jeans and sweat.

But due to a birth defect (lack of silver spoon in the buccal cavity), I am forced to work during the week. And so the only time I can go to worship at the altar of the polyester gods is at the weekend. But like a cross between Bear Grylls, Beyoncé, Kelly and the other one who makes the tea, I'm a survivor and have developed five key strategies to ensure that you get maximum shopping with minimal belting-people-across-the-head-for-acting-the-shopping-maggot.

Now, I'm not saying these have the Bear stamp of approval just yet but I know he'd agree with them all as long as I included something about carrying a packet of emergency aforementioned maggots in your pocket.

If you go to Penneys after 11am on a Saturday morning and expect to enjoy the experience, then you are an imbecile. That may sound harsh but I would use it as a litmus test for the sanity of those people who have previously shown an interest in being in the Winning Strike audience (that's clearly strike one in my book).

If your local Penneys opens at 8.30am, for the love of God, be there before 9.30am. Things will be vaguely neat, it'll be quiet and there won't be a queue for weirdly-lit changing rooms. And you can feel smug as you march straight up to the cashier, no queues for the early birds.

If you have velcro tracksuit bottoms left over from 1999, wear 'em. This is not the time for skinny jeans that take five minutes to wiggle into and high top Converse that require lacing up time. And under no circumstances should you wear a body top with poppers. This is the time for clothes that you can shimmy into and out of in under three seconds flat. If you can avoid the changing rooms, you get bonus points. Find a mirror, glare at anyone that tries to look at their reflection in it with a rabid look that will send them scuttling to the homewares section.

They'll be coming at you like bumper cars, leaving you as bruised, broken, crushed and crumpled as the 'Shane Long's on fire' t-shirt that they surely had mass produced. Wear steel cap boots to protect your toes. Wear jackets with padded and heavily studded shoulders to discourage close contact.

And put your hair in boxer braids (see a Khloe K's version below) so that you can spin around like a Tasmanian devil, smacking space invaders right in the chops and making sure you get that last printed tee in your size. I do not advise putting little stones in there for added oomph. I do not advise that AT ALL. But if you and I are both reaching for the last pair of glittery hot pants, don't test me. 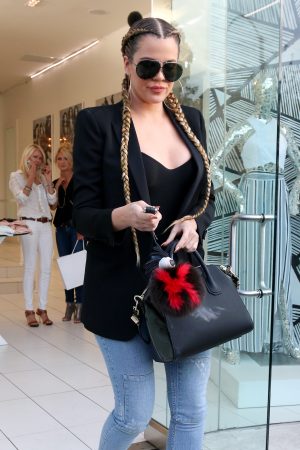 Don't bring Siobhán who dithers and can never make her mind up and looks at you with the expression akin to that of a sheep when you ask her what she thinks of the velvet dress you've just found on the floor (one woman's Penneys trash is another woman's Penneys treasure). Siobhán is weak. Siobhán will only slow you down.

And neither should you bring Geraldine who will put the exact items into her basket as you do. There is such a high chance already of running into someone sporting the same blush bomber jacket as the one you've just purchased that you don't need Geraldine jumping on your bandwagon. THERE IS NO MORE SPACE ON THE BANDWAGON, GERALDINE.

Bring Caoimhe who can rummage like a badger on acid and fancies herself as a bit of a stylist. Set her up near a bargain bin and watch her go. You'll be rocking nautical stripes with a sequin pencil skirt and channelling Blake Lively before you know it.

If you make a list to bring with you to Penneys, then you are fooling no one but yourself. Sure, you're going in there for socks and a bikini but you know as well as I do that you'll come out with fifteen pairs of hoop ear rings, two glittery handbags, a chenille bath mat and a pair of shoes that resemble flippers.

Embrace the illogic, Penneys is not a place for rational thoughts. Except for these five strategic thoughts; they should be on a list that you carry in your pocket.

If you've any other survival techniques, do share with the class. And don't listen to Bear, no one is to eat anything they find on the floor. There's always a coffee shop right around the corner, we all know that.

Get all of your Christmas stocking fillers from Penneys

Are you saying Primark right? (Yeah, we know it's 'Penneys', too)

Four fab shorts for working out and going about

Shorts to train in, and shop in!