Are you assertive enough at work?

The workplace can be damn hard work. And that's before you actually do any of the work that you are paid to do.

You spend more time with this random group of people than you do with friends or family. You might not like some of them very much while others may evolve from colleagues to friends. You might work with someone who needs a sick day every time they have a sniffle or another who hasn't iota what's going on really, God bless them. No one knows while they're still here but you heard a rumour about them knowing some incriminating details about that infamous Christmas party incident of 2007.

And my personal experience tells me that being a woman in a workplace comes with additional challenges. I once had a boss who referred to me constantly as 'possum' or 'princess'. There were almost two generation gaps between us and while I knew he didn't mean any real harm by it, I felt like he was stopping just short of patting me on the head every time he walked past. And possibly telling me that I had a lovely bottom. 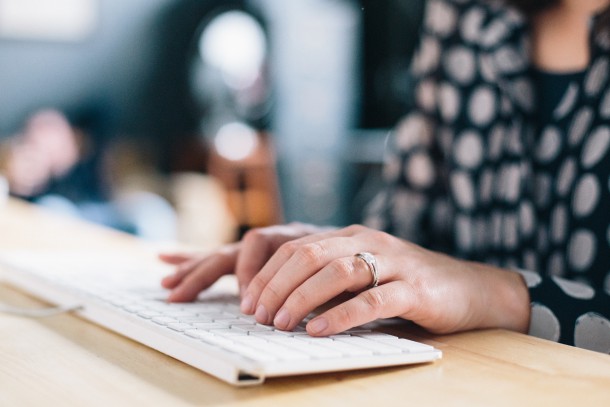 Mind you, I had another who told me I was too vocal and when someone mentioned the difficulties of working with a passive-aggressive colleague (an absolute nightmare and energy vampire for any business), my boss pointed at me and said, 'at least you didn't have to work with someone who's aggressive-aggressive'. I didn't speak any more than my male colleagues did.

But these two don't compare to the guy who decided that bringing the department to a strip club for lunch to celebrate a lucrative quarter would be a good idea. I was the only female on a team of 14 and this was back in the days when we had more money than sense. I had to work hard to explain why this wasn't acceptable (and not just because lunchtime seems like an extra ridiculous time to suggest, no one wants a nipple in their salad).

If a woman is assertive in the work place, some see it as aggressive. If a woman is opinionated, some see her as a ball-breaking bitch. Gender shouldn't matter, it's your ability to get the job done that should count. Equal work should mean equal perception (both positive and negative) and equal pay. 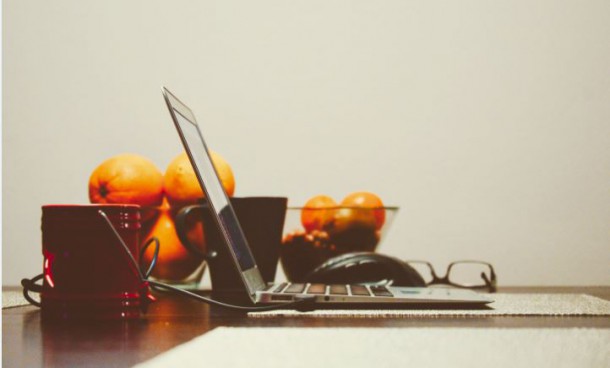 When Patricia Arquette used her Oscar speech to call for wage equality, I hollered along with Meryl Streep and Jennifer Lopez. Whatever industry you work in, you should take stock and no prisoners.

But that's easier said than done. You might find that a good place to start is by looking at how are you portraying yourself in the way that you choose to communicate. What words do you tend to use in your emails? Are those mails peppered with words like 'sorry' and 'just', words that some would say are apologetic and undermining of your own value or indeed the value of your work? 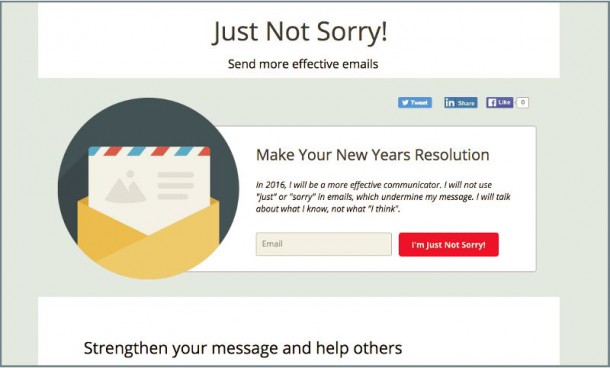 If you've ever sent an email like 'Sorry, just wondering if you had a chance to take a look at my report?' or 'Just checking if you're coming to the meeting later? Sorry for disturbing you!', then perhaps you'll be interested in this new plug-in designed by Tami Reiss and the team at Cyrus Innovation.

Google Chrome have launched an app for Gmail called Just Not Sorry. This can be downloaded to your Chrome browser and it will review your Gmails for these types of trigger words. 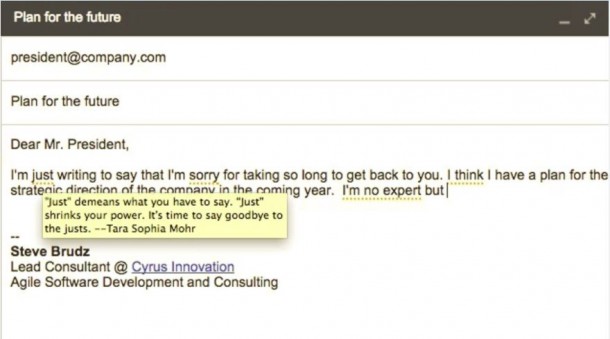 It picks up on words or phrases that are used to 'soften' communication. It underlines them in a different colour to your spellcheck so you can see how often you use them and can decide if you want to change that wording.

But the plug-in has also attracted criticism. Columnist with the US edition of the Guardian, Jessica Valenti, raised her concerns on Twitter following its launch.

I understand the push to get rid of "sorry" & "just" but I'm 100% sick of treating women's language tics as inherently disempowering — Jessica Valenti (@JessicaValenti) December 30, 2015

Because you know what happens when women stop being overly-friendly in work emails & meetings? We're called rude bitches.

You can call me a rude bitch, aggressive-aggressive or a possum, I'll still be the same. Effective communication should be clear, mannerly and have the courage of its conversational convictions.

Have you downloaded Just Not Sorry? Do you temper and soften your emails with certain trigger words or do you edit yourself one way or the other? And if you've any work place experiences to share, we'd love to hear them.