Those celebrity-types sure do love Hallowe'en, but let's face it - they're not off down the road with a black bag on them and a bit of facepaint they found down the back of the couch. Oh no.

And here's just a brief selection of what they got up to at the weekend. You think any of them went out trick-or-treating? Or possibly a bonfire and a few bangers? Possibly.

But I'll tell you one thing, some of Team Beaut were giving them a ghoulish run for their money. And of course not forgetting the Beaut.ie spooky-themed makeup tutorials that were to DIE for, MWAHAHAHA.

Taylor Swift dressed up as a white unicorn/pegasus hybrid for Hallowe'en and it has the added bonus of looking like a pair of  gorgeous fleecy pyjamas, perfect for tumbling into bed in when you can be bothered to wash the glitter/blood from your face.

Katy Perry went as a Cheeto but she ain't got nothin' on our Mr Tayto. 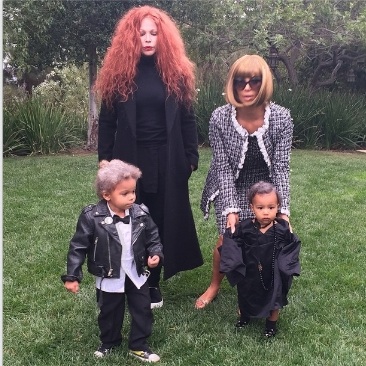 Kim Kardashian dressed up as Anna Wintour of Vogue Magazine. Well, they do seem imitation is the sincerest form of flattery.

Beyoncé and Blue Ivy dressed up as Janet Jackson and Michael Jackson and their combined cuteness negated anything scary about Hallowe'en.

Justin Bieber went as a Power Ranger, assuming that we actually do believe that it's him under that helmet.

And Jessica Alba dressed up as Slash, while her friend went as Axl Rose, and they both headed along to Kate Hudson's Halloween party.

You can check out all those pics in our gallery below - now, tell us, who would you give the most diabolical prize of the night to? We think Courtney Cox is pretty unrecognisable so we're giving all our extra monkey nuts to her...