Bump Blog: are these the best maternity leggings ever?

19 weeks: "Your baby is the size of a large mango." Baby is also busy growing a "cheese varnish" or the "vernix caseosa" which protects the skin from the amniotic fluid to stop them turning into a prune.

Considering baby's getting dressed to protect in a specialised birthday suit, now is a fitting time to delve into the vast world of maternity wear - 4 plus months is generally when you find squeezing into your normal wear an uncomfortable and ultimately futile exercise.

The disposable cash, that was more readily available on pregnancy number one, is no more... Surely some deft purchases were made with possibly another baby in mind? Nay. It was ALL squandered on a full winter wardrobe (on Lara, I started showing in October and gave birth the following March). Therefore, I found myself at a bit of a loss this time around. I'm showing now (winter) and due in June ('summer') so the old wardrobe isn't entirely applicable.

Retrieving the stuffed bin bag from the attic a few weeks back, I initially surveyed the wares excitedly - before reprimanding myself for not buying more wisely three years ago. Here's what the bag contained: Three winter maternity coats. THREE... A proliferation of floaty chiffon blouses (it was a magical period when we had time and money to socialise)... A pair of maternity jeans I now don't fit into (thighs have expanded somewhat)... Three vests (one short sleeved, two sleeveless)... One very woolly cardie... Two very thick tubular pencil skirts... One short sleeved empire line tunic dress... Four pairs of leggings (we'll get to them momentarily)... And one pair of 'sweat pants'. Yikes. 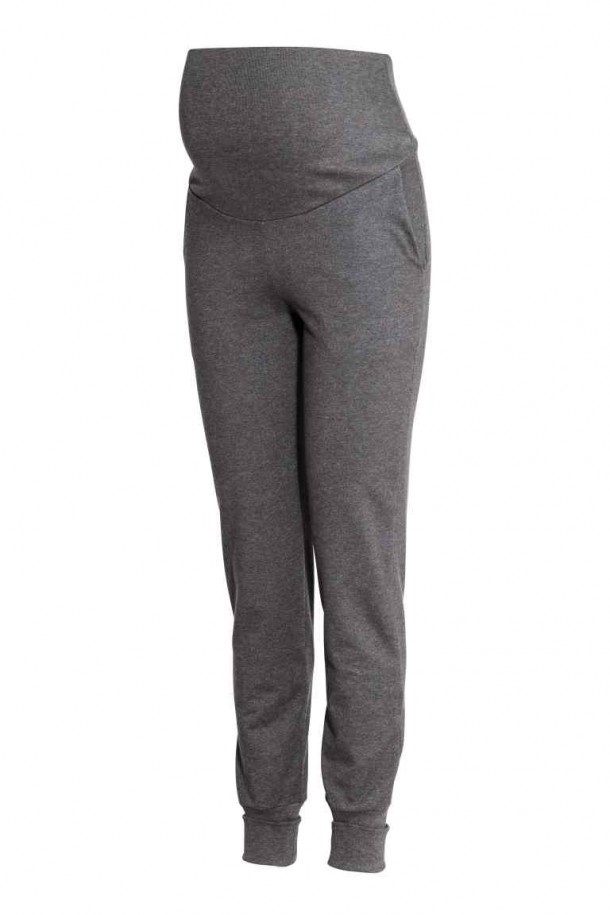 So, what would work this time? One of the maternity winter coats. I don't fit into the other two cause they're rather form fitting and do unpleasant things to the boobs. The arms currently resemble erratically stuffed sausages in the chiffon blouses so they're out, along with the jeans (by way of defence; I've been rather sedentary this pregnancy due to morning sickness and exercise still isn't alluring...) Given I don't go out much anymore, the main thing is finding items to lounge in that can also pass for day-to-day wear whenever an excursion is required. With that in mind, here's what will work this time around -  the aforementioned H&M MAMA 'sweat pants' (€19.99) I lived in for weeks 40 and 41; the three vests; the woolly cardie (until it gets warm); and the empire tunic dress... In short, not much.

If you're wondering 'Why four pairs of leggings?'; when buying them, I was under the illusion that the next pair purchased wouldn't continuously slither south, leaving me grabbing handfuls of material and hoisting it upwards, before ramming the rim under my bra in an effort to keep the crotch from lingering around the knees. Quite the manoeuvre to pull off in public.

Said leggings were not cheap and sourced from various well known maternity wear outlets, and they're all the same: made of a thick 'tights' material, really short in the legs, and really large in the gusset, with a baggy rim. Nobody likes a baggy rim. You want to wriggle / huff-and-puff your way into a pair of leggings and for them to stay the f*** put, not be readjusting them for the rest of the day. The reason I'm banging relentlessly on about leggings is because - personally - they work for every season; boots in the winter, with flip flops in the summer.

Well, we may have found the best pair of maternity leggings going, and they come in an array of lengths. Go ASOS! These come in a two pack and are also available in 'Petite full length' and 'Tall full length.' Instead of them being made of a clingy nylon material, they have the feel of cotton and a fitted rim so - no matter what size the burgeoning the bump is - THEY STAY UP. €30 knicker well spent. 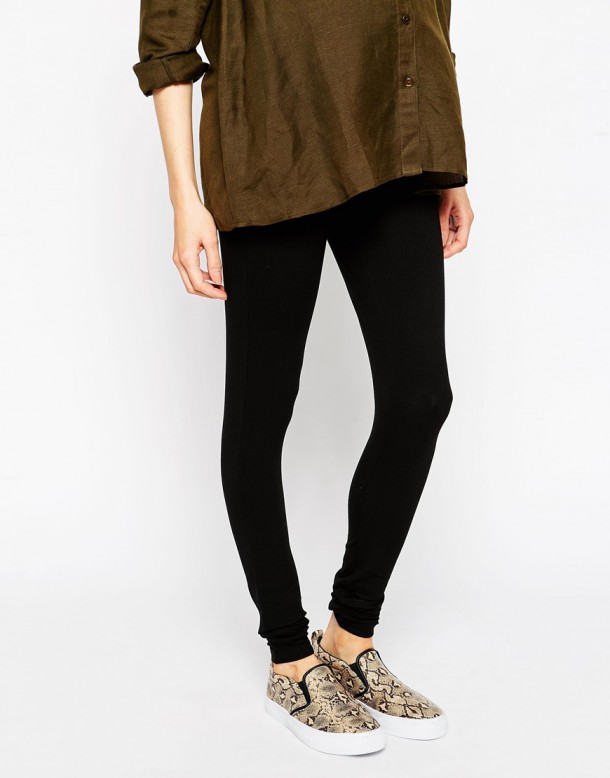 In addition to the maternity wear leftovers 'from last time' and yet more leggings, other recent purchases from ASOS's own maternity range include a waterfall cardigan (€39.44) in a light(ish) knit that can be worn post pregnancy too. Handy for layering up in winter or summer... 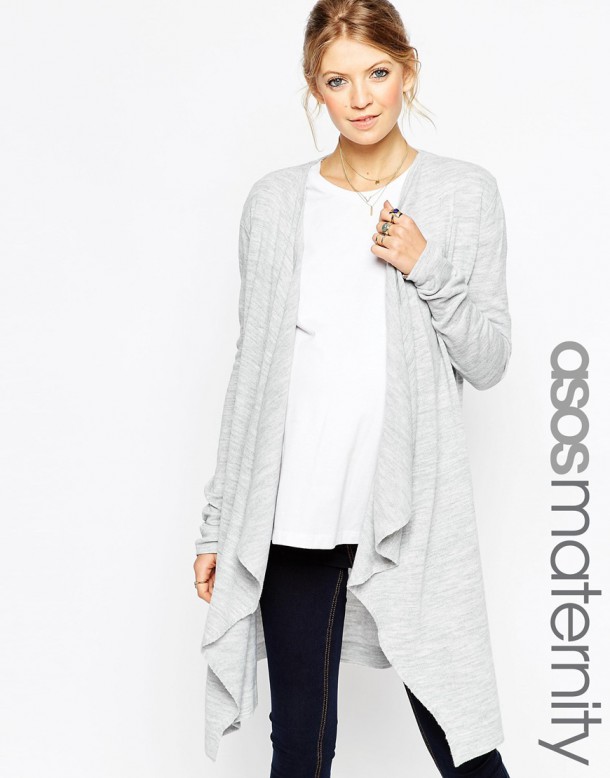 Also this handy New Look long 'laser cut' maternity vest (on sale for €12.68 via ASOS), which is currently being worn with a H&M Basic polar neck and leggings. Obviously when it gets warmer, the turtle neck will be discarded. 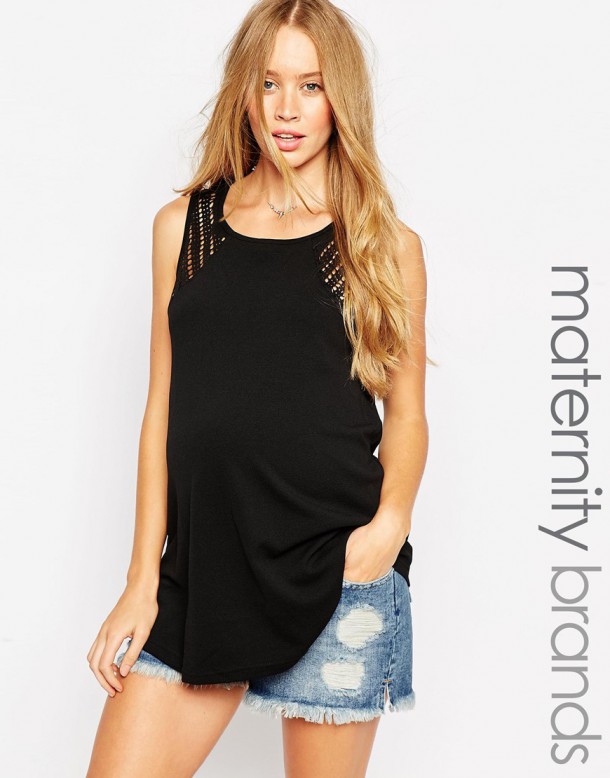 Will that little lot do me for the next six months d'you reckon, or is there a glaring omission from my maternity wear must haves? All advice welcomed. Also, if you've found a pair of wonder maternity leggings that doesn't involve a frenzied episode of public gusset hoisting, please do share!

Bump Blog: Preparing baby No. 1 to meet baby No. 2

How do you choose?!

'Hands off the bump!'

Your hips will thank you...