I could make any number of puns about game, set and match to Andy Murray or how Kim Sears won one-love but I won't because when I say the words 'one-love' I suddenly have the lads from Blue lepping around in my head and creating a dastardly ear worm with key change (you can thank me later).

Both Kim and Andy opted for full skirts and looked only delira. But I have to admit that when I saw her wedding gúna, I suddenly mutated into one of the gremlin friends from 'Say Yes to the Dress'.

For those of you who are fortunately not familiar with the show, it involves one lovely bride bringing her passive aggressive mother, jealous matron of honour, highly-strung sister, bitchy bridesmaid brigade and fifteen other random people that she found out on the street on a shopping trip to find her wedding dress. Sure OF COURSE they're all going to agree.

And it's great craic - they all fight and claw each other's eyes out. And then they use the remaining eye to roll, and/or give side eye and stink eye to Mindy who is blubbing in the corner because the meringue monstrosity makes her feel like a REAL bride.

Go home, Mindy, you're drunk. And in some cases she actually is.

Now if you are a Commerce/Business student, don't feel bad about skipping lectures to watch this because the owners are sales experts.

First they ask Mindy what she's looking for, then totally ignore what she says and bring out a series of frocks that are frocking awful. Mindy becomes distressed and thinks she'll never find The One. Because The One is not a human, it's a gaudy hoop of polyester. 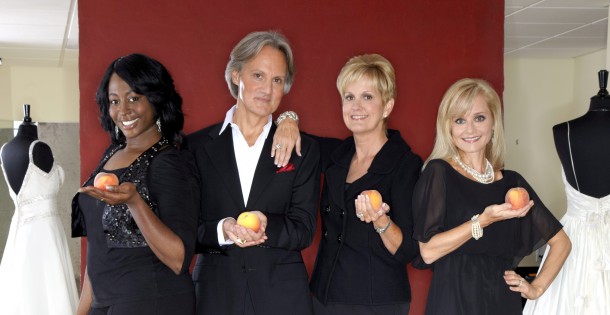 Anyway, then the evil geniuses bring out the dress that they actually want to sell to her and because it's marginally less manky than the others, Mindy starts crying with relief that she isn't destined to look like Gollum in a gúna and then they go through this embarrassing charade of feigned interest where they make her say 'yes to the dress'.

It's car crash tv and my friend Maria must answer for the eye worm she has placed in my life. What has been seen cannot be unseen.

But back to the Murray matrimony - I do love Kim's huge wedding smile and the romantic, almost whimsical vibe of her dress. I just wish I could have run in with a couple of pins and tacked it up, tailoring it to her measurements a little better.

Mind you, I'm full sure Kim couldn't give a hoot what I think. I'm no better than Mindy's second cousin with the stink eye. And she had other things to consider - perhaps like why her mother-in-law was also in white.

Are you a fan of Kim's dress? Have you seen 'Say Yes to the Dress' and did you bring the whole fam with you when you went shopping for yours? To the comments!