Bridal Diary: Going to the chapel when you don't go to church

Welcome back to our new Rookie Bride series. From now until she eventually gets hitched (which could, in fairness, be 2047) Miriam will be keeping you up to date on her bridal diary, every second Thursday. And please, before she falls into a black hole of tulle, gold markers and party favours, join the conversation and share your thoughts. Last time, the only thing she had started to plan was her eyebrows, today a moral dilemma is the name of the game.

I had hoped I would have an update on wedding plans for you today but guys, it turns out that planning a wedding is so much harder than I thought. Shocker, I know.

I have never dreamed of the big white wedding where I get to be a princess for the day (bleurgh) but obviously, it's a momentous occasion that should be marked accordingly. The thing is when our wedding was just an idea in the sky I thought a small ceremony and lunch with family and then a small party afterwards would do, but now I think I want it to be a bigger deal.  The problem is when you are on as teeny tiny a budget as we are, a wedding party for 100 people or more proves...difficult.

I had never really considered the church and hotel thing but a friend made the good point recently that it's so much easier than creating a bespoke affair - and cheaper too. Churches and hotels have been accommodating weddings for decades and they all know the score. Alternative venues are most harder to organise, mainly because you're going it alone.

My problem with having a church wedding is that I'm not a church-goer. I go to mass at Christmas and funerals and, of course, weddings, but it has been a long time since I was a regular. I would feel like a bit of a hypocrite if I turned around now and decided I wanted to tick another sacrament off my list but trying to plan a wedding sans church on a Saturday in Dublin is difficult and expensive. 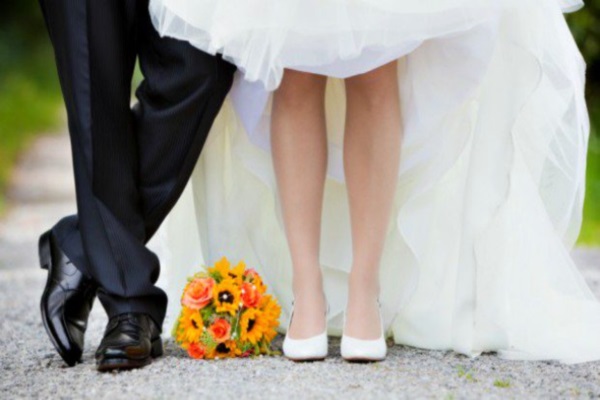 Civil marriages have to be solemnised by an approved Registrar but they are only available during office hours and on weekdays. We had the idea of a lovely City Hall ceremony but the only date they had available was a Saturday, which meant we would have to get a Humanist celebrant and they are in high demand. An alternative would have been to have a registry office wedding and then have some sort of separate ceremony later on but that all seems like a lot of extra hassle to me.

Creating a bespoke wedding is like trying to complete a jigsaw, but the pieces are all from different pictures. Snagging a celebrant for the venue you want for the date you want is very hard to do. And it doesn't even end there; what about the reception? The DJ? The photographer? The band? They all need to sync up too.

If we decide to have a church wedding, I'm sure we won't be the only lapsed Catholics in Ireland to do so. But is doing it for the sake of convenience and to save money the right thing to do?

We're not crying, YOU'RE crying

Is she the most down-to-earth star ever?

The stag party that paparazzi dreams are made of

And Kate's 'absolutely delighted' with the news

No shuffle 'n' shimmy for these two