Sexy sexy Halloween: it's such a sexy time of year! Sexy Pikachu to sexy Freddie Krueger!

Ah Halloween. There was a time when Halloween night was spent bobbing for apples and horsing through barm brack to be the first to find the gold ring and costumes consisted of a black bin bag and a cheap plastic mask that made your face all sweaty. However, in recent years it has increasingly become the night that you’ll see girls dressed up as sexy police officers, sexy taxi drivers, sexy nuns or sexy [insert literally any noun here].

Since online costume shops have gotten in on the act, the sexy costumes have grown steadily more weird and ridiculous. And now, just for you, I’ve compiled a list of the worst “sexy” costumes for Halloween. During my search, I decided to split my findings into three groups. Starting with this: 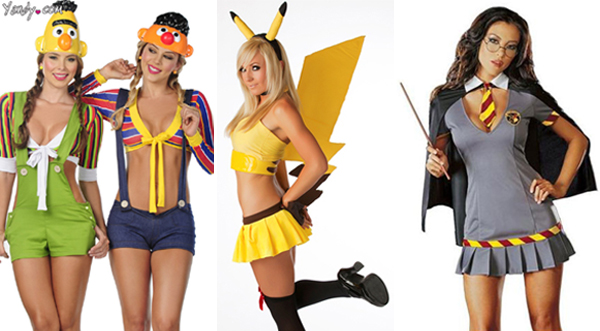 Here on the left we have sexy Bert and sexy Ernie, for the people who watched Sesame Street and thought to themselves “phwoar, those muppets are a bit of alright” i.e. NO ONE. I think the worst part about these costumes, other than the fact that you would actually freeze to death, is that it looks like Bert and Ernie have been murdered and the models are wearing their decapitated heads as hats, the gruesome wagons. We also have sexy Pikachu, which is just downright wrong and sexy Harry Potter. I must admit, at first I assumed that it was sexy Hermione, as that might actually make some creepy sort of sense, but the model is wearing glasses like Harry's, so it's actually a sexy girl version of an underage boy wizard. Right. 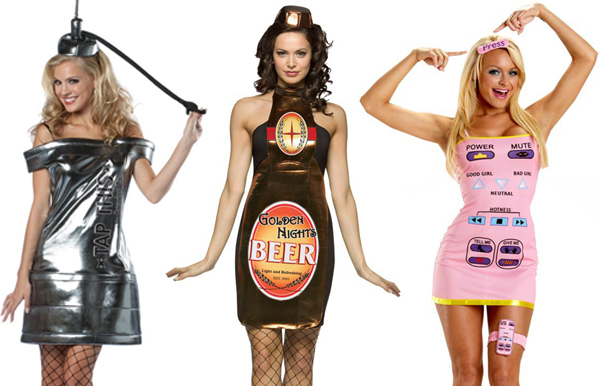 When I was describing my idea for this post, I threw out “sexy beer bottle” as an example of a totally stupid costume. But then I Googled it and it turns out that there actually IS such a costume. Of course, how silly of me. But that's not the half of it, there’s also a sexy keg costume, with TAP THIS emblazoned along the side of the silver dress that looks so flammable it’d probably catch fire if you looked at it for too long. But to be honest, it’s nothing compared to the costume that takes the sexy inanimate object cake. The sexy remote control. That’s right ladies. Complete with a power button for your head and an actual remote control garter, in case anyone didn’t get it from the horrendous dress alone. I’m almost certain this is one of the signs of the apocalypse. 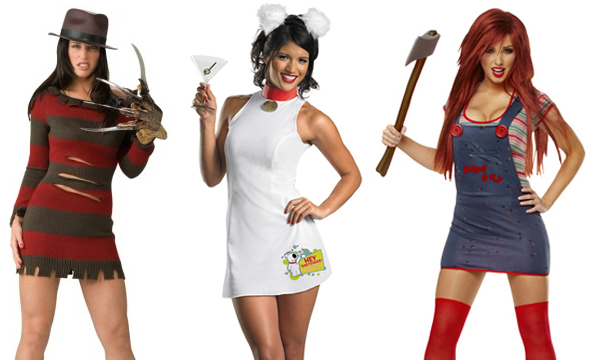 I rarely, if ever, use internet acronyms, but I felt that this particular category was best described as WTF, because they make absolutely NO SENSE. First of all, there’s a sexy Freddie Krueger costume for ladies, because what’s sexier than a hideously disfigured serial killer that murders kids in their sleep? There’s a sexy Brian from Family guy costume, so removed from the character that there’s a picture of him on the dress because there’s no way anyone would have a clue what the hell you were supposed to be otherwise. Which is a sexy version of a cartoon dog.

And finally, what is potentially the most bizarre one of all, a sexy Chucky from Child’s Play costume. Just to refresh everyone’s memory, Chucky is a doll that gets possesed by a murderer and goes around killing people in a series of dodgy Eighties and early Nineties horror films. So this costume is essentially a sexy version of a doll that looks like a small child that kills people. I have no idea why this exists.

So there you have it, a selection of some of the worst ever sexy Halloween costumes. I didn’t even get to the sexy crayon, sexy Etch-a-Sketch or sexy Optimus Prime costumes. I’m totally serious. Next year I’m going as a sexy traffic cone.

Have you come across any other totally stupid sexy costumes on your internet travels? And what are you dresssing up as for Halloween this year?

Top fashion looks of the week (and one grumpy celeb)

Metallic, mesh and a dash of mope

Could this hairstyle become The Rachel of 2016?

Beaut.ie Fix: The Most Popular Stories on Beaut.ie