Ask & You Shall Receive: Why is buffing making my nails weak? 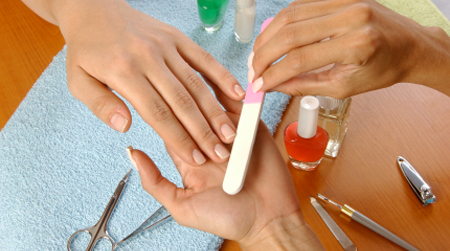 Mags e-mailed me over the weekend to bemoan the state of her poor talons. A recent convert to nail buffing, she thinks that her nails seem to be fragile and prone to breaking more easily since she discovered the procedure.

It's likely that Mags' new fondness for being in the buff is the culprit alright, because it's pretty easy to overdo things on the nail buffing front; you get a bit addicted to the lovely shine, I think. It's important not to buff too hard - a very light hand is all that's needed, let the buffer do the work - or too often. Remember, buffing is basically a gentle form of surface abrasion so it can lead to thinning of the nail if it's not done properly.

You shouldn't need to use either the roughest or the medium-grit sides of your buffer much more than once a month, and you should only be using them on new growth, NOT on any part of your nail that has been buffed previously. Then just use the finest portion of your buffer once a week to keep the shine up.