Talk about someone who is wise beyond their years...

If you cast your mind back to your days in school, you may remember going through the process of flat out asking someone if they liked you or not, something we would never dream of doing as adults for fear that a negative answer would crush our self-confidence and turn us in to a quivering wreck in the corner of our room, using the salt of our tears to flavour a broth made of loneliness and onions. It's a meal for one.

Anyway, one 11-year-old girl sent a fairly straight-forward note that only a fearless child would, which was shared by reddit user lindsrae. Her friend's daughter had given it to a boy that she liked in school, which asked whether or not he liked her too. The response that she got was rather more complicated than the yes/no tick-the-box system that she had supplied for him to use could have accounted for. 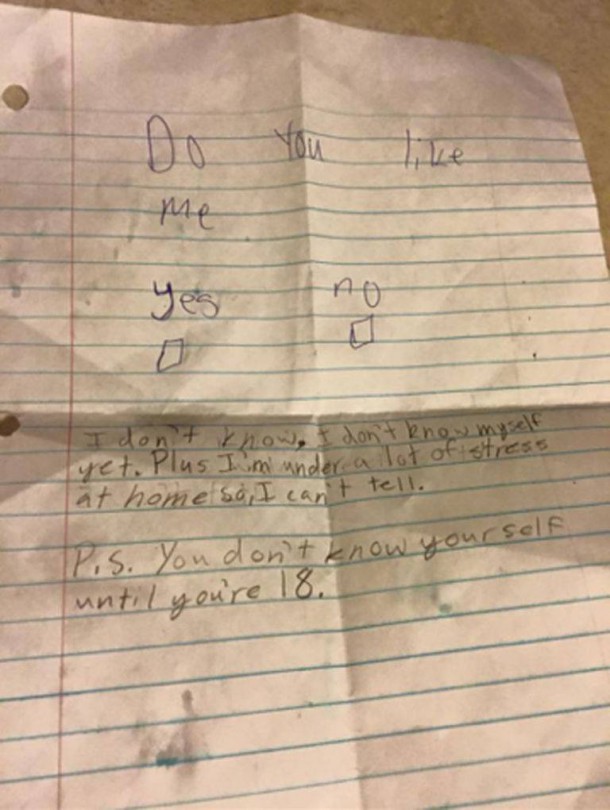 The answer he gave reads "I don't know. I don't know myself yet. Plus I'm under a lot of stress at home so, I can't tell. P.S. You don't know yourself until you're 18".

That is a philosophical answer of a man who is wise beyond his years, apart from the bit about knowing yourself at age 18. Modesty forbids us from telling you our age here, but suffice to say we're a long way beyond 18 and still have no clue who we are. Thankfully, our driver's licence has at least some of the answers.

Still, this is one of the mature potential-dating interactions we've seen in a while. Forget adventures on Tinder, this direct approach is the way forward.

We'd love to hear your best/worst asking-people-out stories! Are you an old hand at internet dating or was the night John Joe asked you to his debs using Frosties to spell out 'D-E-B-S-?' in front of your mother the pinnacle of your romantic introductions? To the comments!

Scarleh For Him! Victoria made David Chaperone Brooklyn on First Date

To be fair, he 'sat five tables away'

Science Speaks: The Lady In Red Gets the Guy

It's been proven that men are drawn to women in red