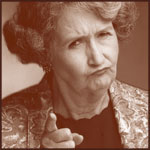 It's gas how we tend to ignore received wisdom, the kinds of things your mother and your granny and all the magazines and even the dogs on the street could tell you. Like, you really shouldn't wear foundation that's 14 shades darker than your own skintone. That one usually doesn't click with girls until they hit their mid-20s, and here I have to put my hands up and admit that up until a few years ago I was quite content to go around honey beige-d from top to toe.

Another thing mammies and everyone else are fond of repeating until they're blue in the face is "Don't squeeze!!!!" when the issue of how to deal with blackheads and spots arises. Which is of course absolutely right and is all well and good in theory, but y'know sometimes it's impossible to resist an oul' prod, and of course I'm guilty here once again.

My chin is affording ample squeezing opportunities at the minute, and one night about a week ago when faced with a lovely big mirror and fantastic lighting, I had the fingers poised and pressed into action before even thinking about what I was at. I did - just about - manage to stop at one spot, though.

So now I've been able to study how an unmaligned spot fares compared to one that's had the crap (quite literally) squeezed out of it, and whaddya know - Mammy was right. Going at a spot that's not quite ready to be taken out of action means you wind up breaking the skin and probably drawing blood, leaving you with a red, angry looking mess surrounded by flaky skin and topped off with a little scab. Nice.

At least it's possible to do a good cover-up job on an untouched spot with a bit of make-up - as long as no-one looks at you side on! The blemishes I didn't pick at but instead doused in tea tree oil and crushed up aspirin and clay masks and Mario Badescu's Silver Powder have actually cleared up much quicker than the one I insisted on meddling with.

Is there anything mammies don't know ..?