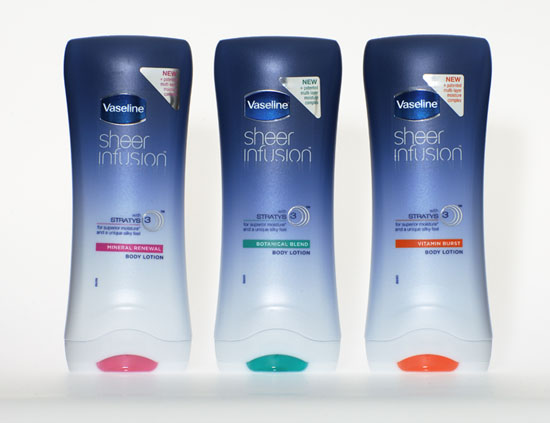 These boyos have been out in the US and UK for some time and are on counter here, but Vaseline's latest body moisturisers, Sheer Infusion, were unveiled to the press at a launch yesterday, ably aided by Embarrassing Bodies' Dr Pixie McKenna (very tall, excellently spoken, sadly no, we didn't get to show her any crusty parts of our anatomies. No old men's mickeys made an appearance either, thankfully) and Beaut.ie fave Amy Huberman (gorgeously attired and elegantly shod. We love her more than ever now).

For €5.99 for a 200ml bottle, Vaseline has packed in a lot of science. New tech comes in the form of fabulised gylcerin, which they've doo-hickeyed (a serious science term) into something called Glycerol Quat, a pumped up ingredient that's capable of holding four times more water than yer regular, common-or-garden glycerin, which you'd find in most moisturisers. So that's part one of a tri-phase whammy of goodies and the aforementioned new tech, Stratys-3, aims to hydrate skin through - you guessed it - the three layers of the skin.

Glycerol Quat's got something else up its sleeve too: while the brand say the moisturising capabilities of the Sheer Infusion products are the best of any comparable product out there (and they've done benchmarking against their competitors) they've de-stickified the formulation so you can actually get dressed in under three hours. Sing hosannas - are my hosiery-wrangling struggles about to come to an end? Oh say it's so - in a quick test it does feel light and silky and not at all like a super-duper heavy, thick cream.

Available in three variants - all of whom have the exact same moisturising properties -  there's vitamin burst, mineral renewal and botanical blend. All smell fresh and nice, and everything sounds just peachy on paper and in pixels - but the real test, as always, will come with using the product, which I will be naturally doing forthwith.