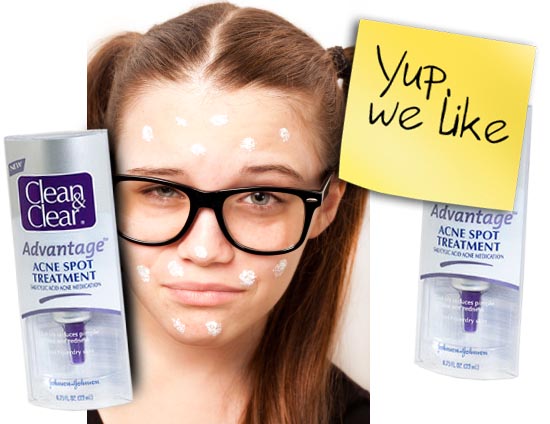 Prior to Friday evening, the last time I'd perused the Clean & Clear section of the skincare aisles was about fifteen years ago. I was utterly obsessed by blackheads at the time and tried but was ultimately disappointed by all the usual aimed-at-teens suspects that promised to banish them.

The products that failed me back then included a number of offerings from Clean & Clear, so hopes weren't exactly sky high when I picked up a tube of their Advantage Acne Spot Treatment, €4.99, in Boots. That said, its active ingredient salicylic acid works really well to clear the occasional spots that sometimes crop up on my skin nowadays, so I was cautiously optimistic that it would be a more convenient alternative to the aspirin mask that I've had such great success with.

The promise that it would help reduce spots within just four hours of initial use may have helped seal the deal.

Packaging is functional and unisex in silver and dark purple, while the treatment itself is a transparent fluid gel with a slight milky-coloured tinge. It produces a bit of a cooling sensation on application, which feels rather soothing on painful spots, although it does contain some alcohol so I suspect using this stuff on broken skin might not feel quite so nice.

I've put Advantage Acne Spot Treatment to the test on a selection of blemishes and tried it both under and over make-up, and I'm happy to report that I've been pleasantly surprised by its performance. My slap sits quite happily on top of it, and it doesn't move my foundation around if I apply it after the fact (although that might not hold true for powder formulations; I'm a liquid foundation fan.)

It doesn't dry out my skin as badly as products containing benzoyl peroxide are inclined to. And while it doesn't quite manage to magic away spots completely in those initial four hours, it does significantly reduce redness and soreness and overall lumpiness in that time.

I'd call that a win.