Why are Irish men such eejits when it comes to suncream? Why? 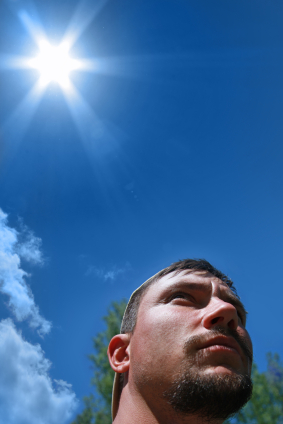 I'm reposting this article (I first posted it after a sunny weekend in 2009) in support of the La Roche Posay SOS Save Our Skin Campaign, which highlights the stark fact that 47% of Irish men do not wear sunscreen.  And one in eight of Irish men develop skin cancer.   Join the SOS campaign here and we'll have more on it during the week.

Please guys we love you - slap it on.

Over the weekend I attended various outdoor events in peoples gardens in the glorious sunshine.

At none of these events were the men displaying any evidence of sunscreen. All of the women were high factored and had little top up tubes in their bags. But the men? Oh no.

On Saturday I lost count of the people who said to the husband "You're getting a grand red neck on you there". Or "Jesus you're turning into a bit of a lobster". To which he would reply "Yeah, a sexy lobster".

There is no such thing as a sexy lobster.

Even when he was told he had a neck the colour of a turkey cock (I know, it was a new one on me too) it did not inspire him to slap on some sun cream or even sit in the shade.

I veered between offering him my factor 50, to thinking "well he's a grown man for God's sake, I'm not responsible for him."

But WHY are Irish men such idiots when it comes to sunscreen? Why is it somehow not macho to admit you are fair skinned and need to slap on some cream.