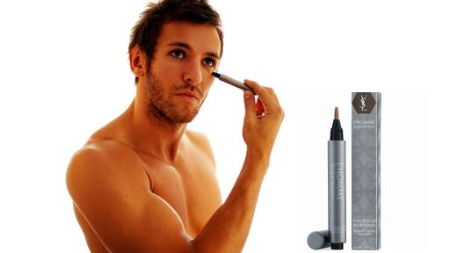 We've had a few posts before about man make-up, about guyliner and manscara and false eyelashes for blokes. However, none of those offerings were from big-brand cosmetic houses. This, to quote yer man off the Donegal Catch ad, is another world altogether.

The iconic Touche Éclat is a staple in most women's make-up amouries, but now YSL have reformulated it to produce a version specifically for male skin. Unfragranced and offering more coverage than its female counterpart, YSL hope that Touche Éclat For Men will encourage the fellas to see cosmetics as skin enhancers rather than just tools for creating a full make-up look, and promise that it will make eyes "appear more revitalised, piercing and deep." So now.

Make-up wearing Stuart Pilkington (of Big Brother 'fame') was on hand in Selfridges in London for today's 12 o'clock launch, and apparantly they already have repeat orders on their books. In the space of two and a half hours.

What do you make of all that, than?