Top Ten Man Crushes: Does Your Fella Have One?

We often write about our girl crush de jour - we might not fancy them (though some might) but these are women that we just love and have developed strange little crushes on. And men, when it comes to other gents, are no different.

The world of bromances and man-crushes is alive and well. Your fella might not admit it but trust us, he has one. Or ten. Men want to hang out with these guys 'cos they are cool, awesome at what they do, great with the ladies -  basically, they want to BE them.

So we've put together our list of what we think are the ten most common man-crushes for Irish men.

He was married to Kim Basinger, has a daughter named Ireland, and had the best cameo ever in Glengarry Glen Ross, so he's already a hero to the gents.

But it wasn't until he played Jack Donaghey in 30 Rock that our menfolk realised just how much they loved Baldwin. A rich, right-wing, sexist drunk shouldn't have appealed to anyone, but his awesome mix of scalpel sharp humour, perfect delivery, refined suits and power-wagging made them wish they could take him to the local for a pint.

This entire top ten could've been filled with sports stars, but there has never really been anyone else to take Beckham's place. He's got the job, he's got the wife, he's got the kids, he's got the Calvin Klein underwear modelling gigs, he's got it all. Remember when he grew his hair long and wore one of those wrap things in his hair, and then suddenly everyone else did too?

Remember when he was the face of Brylcreem, and then suddenly every guy you knew was using Brylcreem? David Beckham was basically the male equivalent of Jennifer Aniston. Women wanted him, men wanted his hair-style (but not his voice).

The fellas didn't pay much attention to Brad back when he was in the likes of The Wedding Crashers or Failure To Launch because he looked like just another pretty-boy. But then The Hangover came along, and all of a sudden every woman in the world wanted to get to know him, and suddenly the men took notice. Following that up with the likes of Limitless, The Place Beyond The Pines and The Silver Linings Playbook, and we all know this man can act. Plus he can speak perfect French. Perfect for a bromance cognac.

Keeping up the Irish end (phnaw phnaw), Fassbender is a MASSIVE entry in this list, perhaps BIGGER than most. In case our subtle references weren't clear enough, Fass is here because he's got SO MUCH talent. Anyone who's seen Hunger or Shame will know he is one of the best actors of our generation, with everyone from Tarantino to Ridley Scott wanting to work with him, plus he's got that whole handsome Irish rogue thing going on. And the fellas from Killarney and beyond would like nothing more than to have a few Jamesons with him down the local. 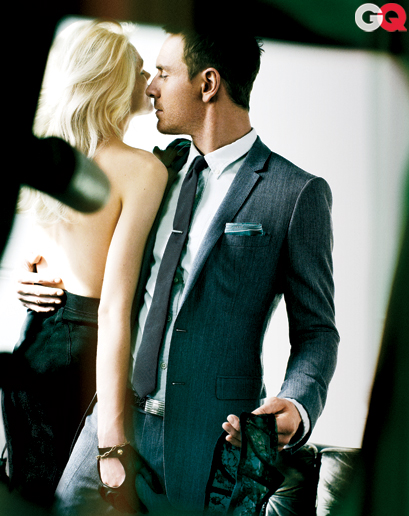 Gosling blurs the lines of man-crushing a little bit, because it is genuinely difficult to look past just how gosh-darned pretty he is. Baby Goose has hooked up with some of the hottest chicks in Hollywood - Rachel McAdams, Eva Mendes, Sandra Bullock - and on top of being a fantastic actor, he's also in Drive, one of the best, coolest films to have been made in ages. Gosling is our generation's Brando, basically. And let's be honest, everyone crushed on Brando.

What man out there doesn't want to be Don Draper? Awesome with the ladies, handles his morning scotch like a boss, awesome job… what's not to love? But is it Draper they want to be, or is it Hamm? So perfectly embodying the idea of masculine cool, Hamm is the best Superman there never was. But while Draper is what he'll be remembered for, he's also ridiculously funny; check out Bridesmaids, 30 Rock or his hosting gigs on Saturday Night Live for evidence.

Our first awareness of Hardy was as Handsome Bob in RockNRolla, but has since taken over our screens with the likes of Inception, Tinker Tailor Soldier Spy, Lawless and The Dark Knight Rises. Any man who watched his broken brute in Warrior and didn't want to give him the biggest bear hug at the end is dead inside. Next up he's taking over from Mel Gibson as The Road Warrior in Mad Max 4, and saving puppies with Noomi Rapace in Animal Rescue. Tom Hardy… saving puppies. Women and men of the world, prepare yourselves.

We could mention how he survived Home & Away and a series of Dancing With The Stars with his career intact. We could mention he was awesome in the likes of Cabin In The Woods and A Perfect Getaway. But there's two reasons why men think Hemsworth is so frickin' awesome: (1) He is Captain Kirk's dad, sacrificing himself to save hundreds of others, and (2) He's Thor. THOR! We rest our case.

Perhaps the most surprising and least well-known entry on this least, Olyphant's appearance here won't come as a shock to anyone who has seen Deadwood or Justified (or his one-off guest spot in Archer). He's made some career mistakes - Hitman, Die Hard 4.0 - but while the films were bad, he always came away relatively unscathed. Seriously though, if you haven't started watching Justified yet, do so now.

He was married to Scarlett Johansen (and Alanis Morisette), and is now married to Blake Lively. He's one of the funniest and most charming men in Hollywood, and even though his blockbusters tend to fail more often than not - Blade Trinity, The Green Lantern, X-Men Origins: Wolverine - you can't help but like Reynolds. He just seems so… cool. Plus, he seems to be on the cover of Men's Health every second month, so men kinda secretly love/hate him for that, too.

What do you think of our man-crush picks? Who does your fella have a bromance with?

Alec Baldwin had a classy response to the Mr Big rumours

Would Sex & The City have been better with this A-Lister as Big?

It would certainly have been different

How to Deal With Moving Back In With Your Parents

Have The Time Of Your Life This Palentine's Day With Beaut.ie

We Explore the Mysterious World of the CBD Craze

Here's Why I Can't Sleep Without An Eye mask

What Really Happens When You Get Your Heartbroken