Watch: Straight to Sidebar of Shame As Amanda Palmer Has Wardrobe Malfunction

I think it’s fair to say that the vast majority of people who aren’t joyless, hate-filled lunatics really can’t stand the Daily Mail and the sexist, racist, trolling culture they perpetuate. Their “sidebar of shame” is like a glimpse into the mind of a reality TV obsessed serial killer, with bonus photos of models with the audacity to have cellulite or a 14 year old Kardashian in a bikini. 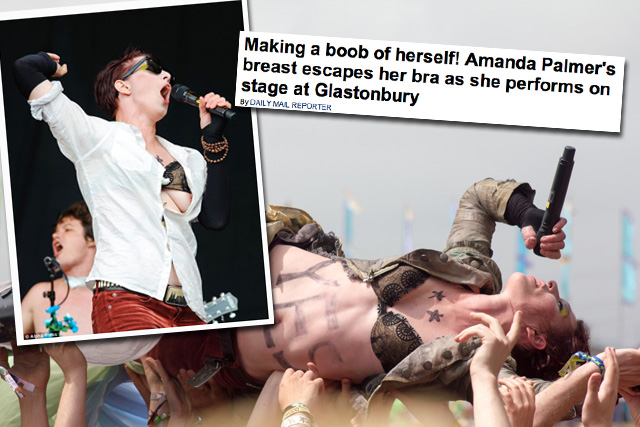 Their recent coverage of performer Amanda Palmer’s set at Glastonbury was business as usual for the Mail. One of Palmer’s nipples made an appearance, so naturally that was the sole focus of the entire article (if you could call it that), along with their typical knee-rubbing style of writing, describing in detail how she “suffered a wardrobe malfunction” and that her “breast escaped her bra” because they’re incapable of talking like normal people.

Anyway, what followed is one of the most gloriously perfect responses to their obnoxious drivel in the form of a song at Palmer’s recent gig in London. It’s called “Dear Daily Mail” and is a blisteringly brilliant smackdown of the trashy tabloid and a damn catchy tune to boot.

I’m entirely on board with anything that describes the Mail as “a misogynistic pile of twats” and calls out their glaring double standards:

I’m tired of these baby bumps, vadge flashes, muffin tops / Where are the newsworthy COCKS?