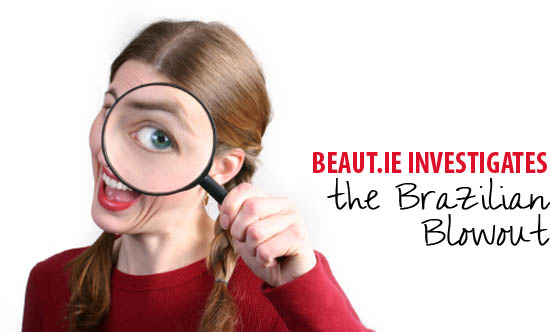 No matter what you call it, the 12 week/permament/everlasting blowdry has been one of the biggest talking points for beauty lovers over the past couple of years. And recently, beauty buffs have begun to take note of a new hair therapy promising the same results but without the harsh chemical load of its counterparts. It's called the Brazilian Blowout and it's a branded product that's sold and performed through hair salons.

Being the sceptical type I am, before we posted about the new Brazilian Blowout, I checked with the PR who'd initially sent me the information to make sure it definitely didn't contain formaldehyde, a serious problem with other hair treatments promising the same results.

No, was the answer, and she also supplied me with a useful Q&A (which we posted for your information) as well as the following assertion. “The only professional smoothing treatment that improves the health of the hair. No Damage! No harsh chemicals! No Formaldehyde!” Wow, we thought, this sounds great, and duly wrote about it.

However, it turns out that things are potentially not what they seem. In the US, ABC news recently ran a consumer report on the safety of the product based on some worrying findings by Oregon Health & Science University’s Center for Research on Occupational and Environmental Toxicology (OSHA). The report came as a result of lab results the centre released the week before last that indicated the Brazilian Blowout formula does contain formaldehyde.

As reported by WWD.com, OSHA had been prompted to look into the treatment when stylists at two Portland-based salons complained of eye irritation, nose burning and other symptoms. Both those salons submitted samples of the product from their salons to the centre, and the results produced by OSHA showed that the supplied formulations of Brazilian Blowout contained between 4.85% and 10.6% formaldehyde, a chemical that is considered a possible carcinogen.

As a way to benchmark those percentages, here's what WWD.com has to say on the matter. “The Cosmetic Ingredient Review (CIR), an industry organization charged with assessing the safety of ingredients used in cosmetics, has declared that in order for a beauty product to be considered safe it should contain 0.2 percent of free formaldehyde or below.”

Now, to muddy the waters further, Brazilian Blowout doesn't actually make the straightening mix itself, but rather gets it from a company called Cadiveu Brasil. That company had previously claimed a mere 0.0002% level of formaldehyde in its product, reported WWD.com.

So, straight off there are a few things to note here: 1. it's possible both salons supplied a non-official Brazilian Blowout mix to the testing centre, 2. the health threat, while worrying to anyone going in to have this done, is much more serious for stylists than us as customers, as they're potentially breathing in this stuff day-in, day-out, and 3. it could also be possible that - given WWD's information above on the manufacturer, Cadiveu Brasil - Brazilian Blowout itself is unaware that the product it is selling is damaging.

As a result of the storm of controversy, Brazilian Blowout has issued a statement to refute OSHA's assertions, which it says are flawed. It claims on its website that “the tests conducted by OSHA actually measured a completely different substance called "Methylene Glycol," and incorrectly referred to this substance as "Formaldehyde." Methylene Glycol is the key functioning ingredient used in most professional hair smoothing treatments currently on the market.”

Beaut.ie also contacted the Irish distributor for the product, Xpert Professional Hair Care, which issued us with the following statement:

“The distribution agent for Brazilian Blowout in Ireland is the highly regarded Xpert Professional Hair Care. Xpert is monitoring the situation very closely and liaising with the HSE personnel currently conducting tests on the Brazilian Blowout product, the results of which should be known at the end of the month (October).”

“Xpert’s David Donnellan has stated that the company will defer to the HSE advice on the matter and he has reiterated Xpert’s commitment to the highest standards of product and practice. That, he has said, is always and absolutely the company’s overriding concern in matters like this. He also confirmed that the manufacturers of the Brazilian Blowout have assured their distributors that the product range is formaldehyde-free.”

What do you think? On the one hand, we have OSHA's worrying findings and we have Brazilian Blowout's strong rebuttal, but what we want to know is will this put you off the Brazilian Blowout treatment or are you reassured by the brand's official statement?

At the moment at Irish hairdressers offering the service, it's business as usual and the treatment hasn't been withdrawn. We'll be very interested to hear if the HSE do indeed have advice on the matter - we could find nothing on its website - and if so, what it will be. Watch this space.