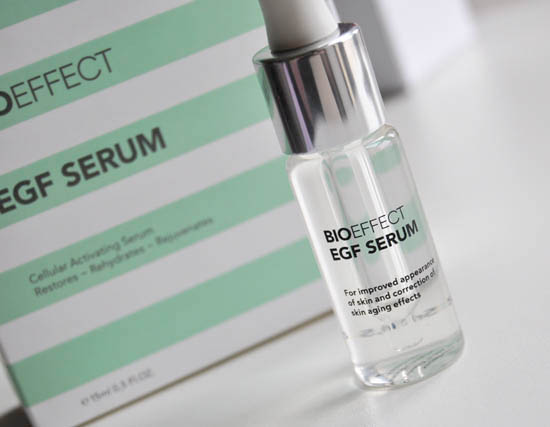 Back at the beginning of February we took a look at something that's new and very different in skincare: BioEffect EGF Serum. This 15ml vial of clear serum comes to us at a cool £125 (about €142) but it's not the tag that's the big news here - after all, you can buy similarly priced anti-agers from a scad of brands including Creme de La Mer, Shiseido, Estee Lauder and Guerlain and we're no longer really capable of being too shocked at pricey skincare products - no, it's the technology.

The selling point with BioEffect is the use epidermal growth factor, or EGF. A naturally-occurring substance in humans, this has the ability to renew the appearance of the skin by encouraging the rate of cell turnover. Bioeffect synthesise the ingredient and grow it inside barley plants cultivated inside a sci-fi style plant in Iceland. It's then extracted from the seeds of the plant and used in the product.

What's so special about barley, though? It's a green method of production for one, barley's a natural host for growing DNA as it happens and because it's a plant-based system, contaminants like e coli are apparently avoided, which can be an issue with animal-based production. This also allows for the production of stable EGF which won't break down, so remains effective as you use your product to the last drops.

On paper, this stuff is nothing short of intriguing. However. I've gotten excited by lots of products before and read loads of convincing science and reassuring study findings, but a short trial on my own skin has told me a different tale - for all a product's attributes and accolades, it just hasn't quite done the job for me.

A thorough trial was what was required to see one way or another, and it's what I've been doing with the product I got to sample. Deciding to stick with my regular day routine of serum and moisturiser and use this at night when I felt it'd be doing the best work, I ditched my normal nightly mix of oils, took the little bottle in my hands and got going.

Unusually for a serum, you use this alone and you don't layer product over it. Originally I had it in my head that one drop was required but three-to-four drops are what the brand recommended when I queried that, so it did take me a while to get the correct dosage for my skin.  This, along with the psychological letting go of a very rich and product-intensive routine, really was the trickiest thing to get to grips with. I think that, much like an oil, this appreciates being applied over slightly damp skin. You're using a small amount of product and this helps it to spread and absorb in the best possible way. 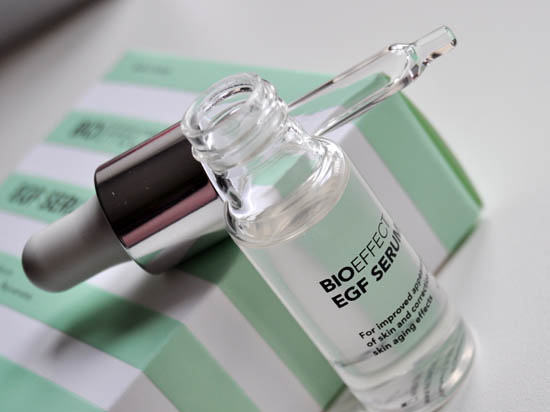 If you use too much though, it is slightly sticky and I did find that it had a tendency to attract dirt to my face, which prompted small blackheads on my nose. I didn't feel it clogged pores in itself, it's just that too much on the skin results in a tackiness that I didn't like. Adjusting the quantity sorted that out, though. I ended up happy with two and a bit-ish drops for my face and one dedicated to the eye area - and it's absolutely fine to use right up into the eye contour.

So, I really had to steel myself for the first week and force myself away from the bathroom cabinet where all my comfort blanket skincare was. Because I honestly did not believe that three-to-four drops of a clear, slightly tacky fluid would be anywhere near enough to keep my dry skin on an even keel, let alone show any improvement in it.

And for a few weeks, I did wonder what the big dealio was with this stuff. Yeah, it was grand. It was fine. I was quite impressed that my eyes hadn't descended into dessicated papery furrows - always the quickest indicator that a product isn't enough for my skin - and I wasn't compensating during the day with any more product than normal. The tiny amount of serum I was using each night seemed to be enough to hydrate and moisturise. But was it doing anything else? You know, any of those things it claimed it would like reverse the signs of ageing, diminish uneven pigmentation and add radiance and luminosity?

And then I noticed the 20 cent-sized patch of pigmentation on my forehead was gone.

Yeah. That patch I was considering trying to get rid of with Clinique's Even Better Clinical Dark Spot Corrector. No need now ladies, I'd say it's about 75% improved.  I started looking a little more closely at my skin and I began to realise the real genius of this product. I can't say that you'll see a lifting, tightening effect with this. In fact I don't think it can do major wonders on deep-set lines (though I'd swear my brow-furrows do look a bit better) but its real, proper, honest-to-goodness super-power is that it can add clarity, refinement and smoothness to skin. My complexion does look fresher. My pigmentation is improved - I didn't have much, but I had a couple of spots that did bug me - and my skin looks brighter.

And it seems that a lot of it is indeed down to the EGF. I did a bit of reading as I tested and had a concern that for all the fancypantsness of the ingredient, it might not even be getting absorbed. There are different types of growth factors and some are too large in molecular size to penetrate the skin's barrier. I quizzed Bioeffect about this and apparently, it isn't necessarily a problem with EGF.  While not all of it may get through the skin's star matrix (look at your skin under magnification, it looks like interconnecting stars), follicles and sweat glands, enough does penetrate to do the job, they say.

On that point, the brand claim they use the highest EGF concentration in a cosmetic product, though they wouldn't reveal the exact percentage. It's worth noting that the ingredient is last on the list of just nine that make up the serum, with glycerine, an effective hydrator, being number one.  There's also some alcohol in there - you do often find alcohol in moisturisers and in small doses it does not have a drying effect - which you can get a whiff of as this is unscented.

For my dry skin, this performed excellently, but it's not just for one issue. Sensitive types should find it works for them too, given the pure production methods, the lack of fragrance and short ingredient list. Equally, sebum-prone skins have been finding that it has a normalising effect on oil production.

So, anything else good, bad or er, downright weird? Yeah - something a little ... hairy happened. I noticed that my upper lip was, how shall we say, a little more active than usual. The whole grow-my-brows-endeavour did splendidly as well, but thankfully that was all - I didn't develop mutton chops or anything, probably because I was concentrating my application on the centre of my face. Nor did it cause hair to grow where there previously was none, so fear not.

I also put this to the brand who reacted with extreme calm - it seems EGF doesn't just like helping skin along - and they'd heard another report of someone's eyelashes springing to full and feathery life. It's not a biggie, just something I didn't expect.

The last downside to this product are price and availability which are are going to be stumbling blocks for many. I do genuinely think it is good and I would recommend it because I have found that it works, but it is a very large amount of money to spend, even if you do get a couple of months use from it - and of course, you don't need to layer anything extra on top, which helps with associated skincare costs. The initial outlay puts it out of the reach of many from the get-go however, though there is a more affordable 5ml option available for £49/€55. There are also no Irish stockists and you have to buy online at the moment.

All that said, this is a really interesting and promising launch and it's well worth a look - read below for how you can do that to try before you buy.

Keep your eye on the blog, because tomorrow we'll have a chance for 250 of you to get a FREE travel sized BioEffect EGF Serum, each worth £30/€34! The serum will last approximately two weeks so you can test it for yourself and see what you think. There'll be a discount code included too which will give you £30/€34 off the purchase of a full-sized bottle. Well, can't say fairer than that, eh?