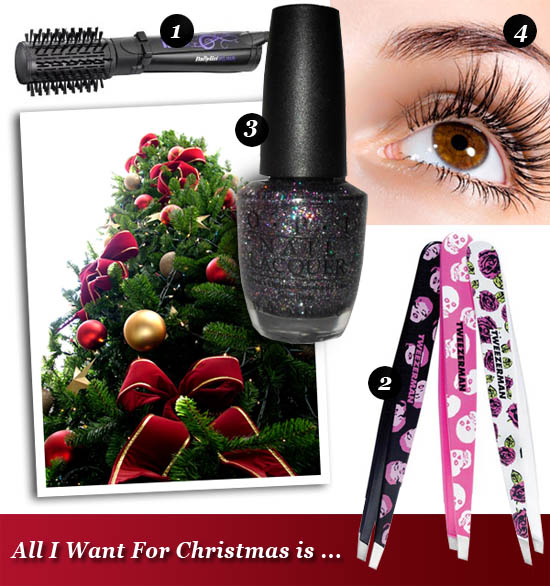 Christmas is a-coming, and I for one have never been less organised. This time last year, I had made my own mincemeat (it was pretty much the only domestic thing I did in 2010 but I was mightily impressed with myself), put together a who's-getting-what gift list, and purchased my shoes for December 25th.

At the minute, there's not a dog-child in the house washed (and he is in desperate need of a visit to the groomers) but at least my Christmas wish list is in order...

1. Babyliss Big Hair
Yes, it also put in an appearance on my list last year. No, I still haven't got one. To be completely honest, the ads put me off for a while because one of the women in them has what appears to be the most awful case of helmet hair after using the device.

Since I got my hair chopped in October, though, I am obsessed afresh because it is impossible to keep any kind of volume at my roots without backcombing the bejaysus out of them, and I like that this dries and imparts bounciness at the same time.

2. Tweezerman tweezers
I managed to drop two pairs of plucker outers by Tweezerman into the sink in quick succession recently and completely knock their tips out of line (there was much use of an expletive that rhymes nicely with"PLUCK!") so I'd be only delira to find a new pair in my stocking come Christmas morning.

Y'know, provided that they were the Jonathan Adler-esque slant numbers that Tweezerman did for Benefit or the ridiculously cute purple minis emblazoned with bumblebees that were part of their 'In The Garden' collection.

3. OPI nail polish in Mad As A Hatter
I heart glitter polish at Christmas, but I'm not sure that even Santy with all his present organising skillz will be able to procure a bottle of sold out polish from OPI's Alice In Wonderland collection.

I might take it upon myself to nab one from fleaBay on the off chance he doesn't come through (although you can rest assured I won't be handing over any more than the original price - suck it, limited editions touts!)

4. Bespoke Beauty gift voucher
To the value of one Yumi lashes treatment, which I am now completely obsessed with following Kirstie's experience.

What beauty bits are you most hoping to find under the tree (or will you be sneakily self-gifting) this Christmas?