JUMP AROUND! Up and down. In and out. Side to side. What way do YOUR boobs bounce?

JUST when you thought you'd heard the last of boobs, they bounce up and slap you in the face again. This time with new research from the University of Porstmouth which shows that older boobs are less likely to bounce vertically - that's up and down to you and I.

Younger women's boobs tend to bounce up and down, as well as side to side and in and out but an older woman's boobs move in a totally different way when exercising. 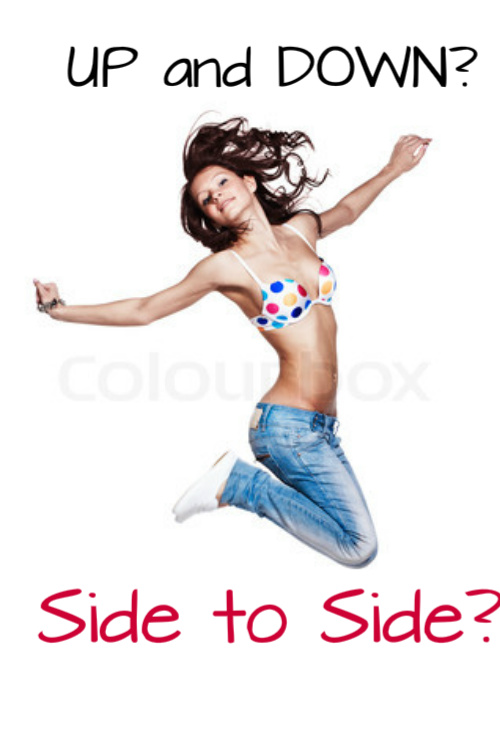 Previous research shows that when running most women's breasts move in a figure of eight pattern but this new research has proved the need for a new look into sports bras for older women, to give them the maximum support.

There's nothing worse than an ill-fitting bra and the same goes for when you're exercising - a pain in the boob after even a brisk walk is a killer, isn't it? So if this study leads to better bras, then bravo I say.

Intrigued by this research, I decided to carry out a little unscientific experiment of my own, to see what way my boobs move when I walk and run. I'm currently in my kitchen in just my pajama bottoms. My house is only overlooked by one other and I'm pretty sure they're at work. Pretty sure.

Walking up and down my kitchen and hall I notice that both breasts move up and down nominally as you would expect. However when I start to run there's a very definite side-to-side motion going on, much more than up and down. Yup, it appears I'm getting old. (I wonder what researchers would say about my larger left breast though, that periodically leaps up in a diagonal motion?)

Now it's your turn. I'm proposing a mass Beaut.ie 'Jumparoo' if you will. Whereever you are right now, get up and walk around and then run around and take note of what way your boobs move. If possible, take off your bra.

Ignore your snickering colleagues/familily, this is for SCIENCE.

Are you an up and down girl? Side to side? The classic figure of eight? Or have you a move all of your own?

Report back in the comments!