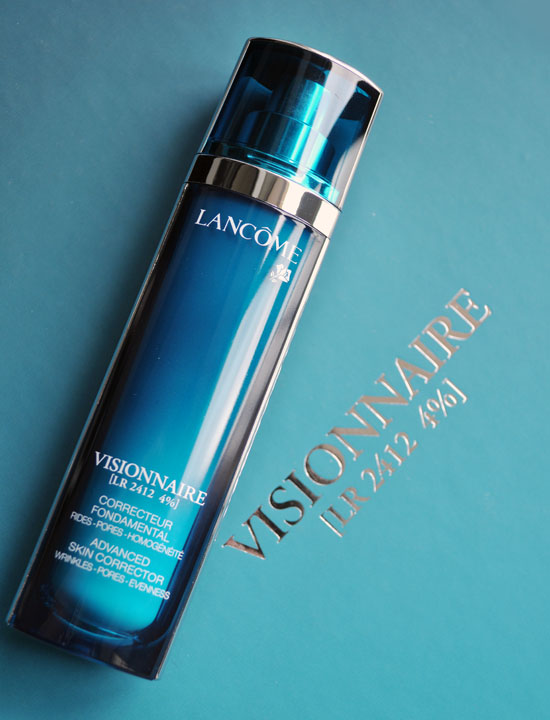 Taking on beauty and cosmetology's gold standard by promising the same results as an equivalent dose of retinol, containing a brand new beauty molecule and independently tested by the same team at the University of Manchester who gave Boots' No7's Protect and Perfect the seal of approval, there's a lot to be interested in with Lancome's forthcoming Visionnaire serum, which will land at Lancome counters at Brown Thomas from August 7th and then nationwide in September.

On Wednesday afternoon I sat down with Julie McManus, Lancome Scientific Director and Vivienne Parry, a UK-based former presenter of Tomorrow’s World and Panorama, who works extensively with the British government, including the Chief Scientist at their Department of Health. She was in Dublin to launch the product, and between the pair of them they slightly baffled me with skin-based science but also explained what it is that Visionnaire is designed to do.

At €70 for 30ml, it's the same price as Genifique, and has its roots in similar gene science. But there the stories diverge, because Visionnaire's a whole new beast altogether. 12 years in development, Lancome initially began to use its new beauty molecule, LR 2412, because they thought it would be a good skin exfoliator. Jasmonic acid, derived from plants, is essentially what the molecule is, and it was given the name LR 2412 because this represents the two thousandth, four hundred and twelfth attempt by the brand's scientists to get it to do precisely what they wanted it to to.

While they knew jasmonic acid was a winner as an active ingredient because in plants because this is a 'signalling molecule' which starts shouting when damage occurs and triggers a healing process, the difficulty was getting it to penetrate down deep enough through the layers of the skin to do its best work. Now, people ain't plants, I pointed out, and was smartly told that indeed not, but we do share about 40% of the same genes as them, so the principles apply. Ok. 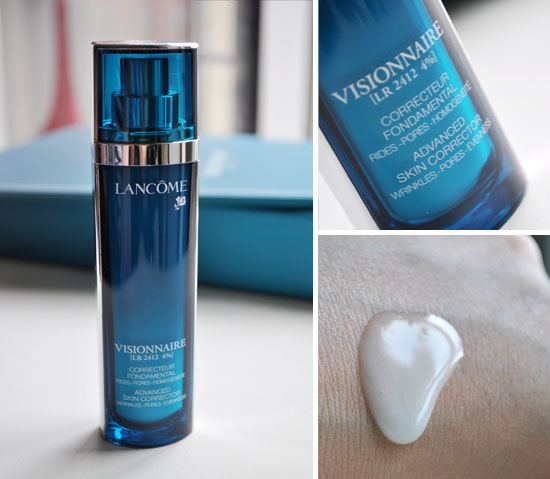 The tests the brand were running were to do with 'folding' jasmonic acid's molecular structure so it could effectively penetrate - in its raw state, most of it would sit on the skin's surface. On test 2412, the folding was optimal and as much as 70% of the jasmonic acid molecule was able to penetrate down into the dermis - the deepest layer of the skin, where all the fancy business goes on. Typically, about 30% of a regular product penetrates, I was told. That of course depends on lots of things - but the more that goes in, especially if it contains actives, the better.

I raised a slight concern at this point, and it's one Aisling's brought up before. As brands move on with promises to moisturise 'three layers deep' and '10x moisturising' are we going to end up with splendidly hydrated skeletons? Is this the new beauty worry, how dry are our auld bones? No, the pair laughed, but Lancome did need this molecule to get past the epidermis, which is the top layer of the skin, in order for it to be able to do what they knew it could. Grand so.

So, what does jasmonic acid do, who's it for and what sort of results can you expect? The serum - which Lancome is calling an 'advanced skin corrector' contains the active ingredient at 4% (which is high - anti-ageing products often only contain portions of percentages of actives) is designed for use at night and it's a product that's designed to address issues like wrinkles, pores and skin texture and evenness. That's a lot to claim but apparently it can tackle those because the active beauty molecule is able to do a few things. For starters it helps with the skin's natural hydration capabilities, harnessing them and helping with your own skin's hyaluronic acid production.

Secondly, it's mildly exfoliative so it can make pores appear better by clearing off the top layer of horny skin cells on the top of your skin (and if your skin is plumped up from behind that also helps fill pores out from behind in a double-whammy). Thirdly, and this is possibly the most impressive of all the claims, it does the same thing that retinol does in that it refines the surface of the skin to reveal less lines and wrinkles. But unlike retinol, which thickens the dermis yet thins the epidermis (which is why you have to be so careful and wear SPF), this claims not to cause that imbalance, and refines skin in sympatico, without irritation.

This is a non-age indicated product and you can use it at any age to prevent or to help correct an issue like UV damage or wrinkles. I would think from quick assessments that you might not get on amazingly well with it if you have very sebum-prone or acned skin as it's quite rich, and if you're very sensitive be aware it's quite heavily fragranced. Texture is lovely and it has some light-reflecting pigments in the mix so it looks good on the skin, has a good slip and has other nourishing ingredients like glycerin and shea butter in there, so dry and mature skins will like it.

That all sounds great, but we're well used to hearing all manner of amazing and boswellox-filled claims from brand X and brand Y. Here's what made me sit up and take notice: Professor Chris Griffiths and his team at the Department of Aesthetic Dermatology at Manchester University independently blind-tested the product and found it did what Lancome said it did. Chris Griffith doesn't work for Lancome and his study wouldn't flatter Visionnaire and more importantly the LR 2412 beauty molecule if it didn't work. Simple as.

There's lots more interesting science-bits around the molecule itself (it's unusual in that it's amphiphilic - it has an affinity for both oil and water), the Manchester University study, its results and various other consumer trials Lancome ran.

This post is turning into the World's Longest and I fear boringest, so I'll leave it there for now. If anyone is interested we'll revisit Visionnaire when it launches and when we've used it ourselves to see if it does indeed live up to its claims.