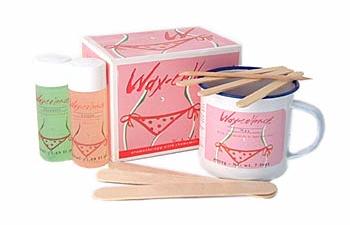 I'm (a) too clumsy and (b) too much of a wuss to attempt waxing the Lady Garden myself on a regular basis, so I don't begrudge the pros a penny of their prices for the task.

Underarm waxing, however, is a different story. At as much as €20 a pop in some Dublin establishments, my first ever professional underarm wax was also my last. For such small, fairly flat and relatively accessible regions, I decided to take my chances with a home kit, ta! After lots of research and some frustrating trial and error (do those Veet strips work for anyone?!), a Wax-cellence hot wax set was procured from the good people at HQhair and is pressed into action on a very regular basis. You basically heat the wax in a bain marie (or "saucepan full of hot water"), apply directly to the skin, allow to harden a bit, and remove with a flick of the wrist. Easy!

This kit is actually manufactured by top Australian waxing gurus Lycon, who also make the waxes used by salons such as Brazilia. Just like its professional equivalents, Wax-cellence is formulated with aromatherapy ingredients, shrink wraps hair to make easy work of removing even short, coarse or stubborn hair, and there's also a pre- and post-wax cleansing and treatment system to soothe the skin and prevent wax from sticking to it.

Oh, and to make those pennies stretch even further, the accompanying instruction leaflet says that the wax is reusable! Just keep all the used, hairy bits of wax, re-melt them in an old container, and then... simply strain the wax back into its original enamel mug through something like a pair of tights.