I'm fairly sure this was supposed to last only about three months but even after daily use, I've been using the NeoStrata Line Lift for about seven.

This week, I've come to the end of both tubes and I have to say, I'm sorry that I am. Maybe it's totally a placebo effect but I enjoyed the almost clinical process of applying the 'activator', which contains expression lines smoothing ingredients, and the 'finishing complex' which seals the ingredients in. 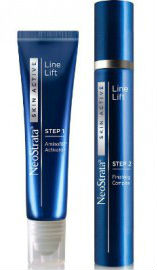 I'm speaking tentatively, but I think it made a difference. I can't tell for sure because I unfortunately didn't take before and after pics but my main concern was the deep frown line between my eyes and I'm fairly sure it has been plumped out. I will admit that since I began using the Line Lift, I've become much more aware of all the the lines and grooves on my grizzled old face and am making a conscious effort not to furrow my brow as much, so that could also be a factor and I've been using a face massager to iron out all the creases. But yes, I believe that the NeoStrata Line Lift made a difference to my frown line, crows feet and nasolabial folds.

The next part of my experiment is to not start using another set unless, after three months, the results are reversed. Because that's the thing about the Line Lift; it's not a permanent fix, it just helps with filling out lines and should be used continuously. At €69.99, it's quite an expensive addition to your skin care routine, but if it works, I think it's worth it.

We first told you about it last February - has anyone gone out and picked it up?