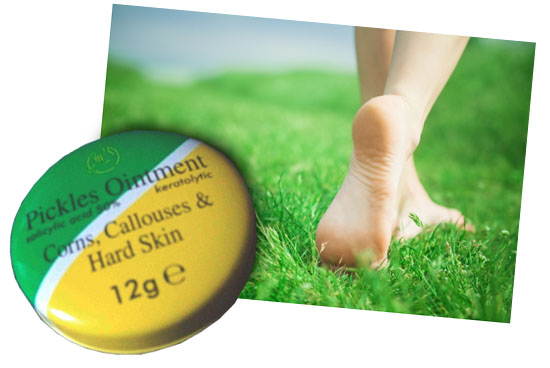 I only managed to drop in on the Blather for mere moments on Tuesday afternoon, but boy did I happen to catch it at a good time. Sparkles was singing the praises of a magic-sounding unction for feet with a bizarre name: "I use Pickles Ointment and the hard skin comes off in one big layer. Disgusting but has to be done before braving the beach!"

Well, I need hardly tell you that you that there was immediately an excited flurry of interest in this amazing stuff, despite the fact that it sounds like something McDonalds might spread on a Big Mac rather than something you'd necessarily spread on your toes. Chemists around the country must have been scratching their heads at the influx of women demanding Pickles Ointment.

Some people have been having trouble finding it, but I got hold of a tin in the second chemist I tried (Adrian Dunne's in Portarlington, for anyone who's down this neck of the woods), where it set me back a weeny €5.75. When you open up the slim outer green and yellow box it's very reminiscent of a tin of Vaseline and smaller than you'd expect. There's no smell - with the word "ointment" in its name, I was anticipating something altogether more pungent - and it's pretty innocuous looking for something that contains a whopping 50% salicylic acid.

That high salicylic acid content means that Pickles Ointment is a very effective keratolytic or peeling agent which causes the outer layer of skin to soften and eventually shed, so it should never ever be allowed come into contact with normal skin - it is strictly for use on hard skin, callouses, and corns.

In other words, ladies, precise application is a must. Pop a small amount on affected areas for four consecutive nights, which even me and my short attention span should be able to manage, bathe your feet on day five, and (this sounds so gross, yet so cool) the treated skin will apparently cast itself, peeling away in one big ol' layer. Awesome.

It's quite thick to put on, and has a bit of a powdery texture, but I can't wait to see the results. I'm hoping against hope they'll be on a par with my beloved medi-pedi. Fingers - and toes - crossed!

Are you giving Pickles Ointment a whirl yourself? Have you used it and loved it? Let us know in a comment!