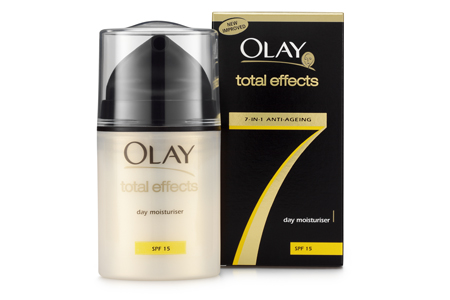 Now with 75% more anti-ageing power apparently, you've probably seen ads for Olay's Total Effects moisturiser on the telly-box recently - the pot transforms into a watering can, a paint-roller and a flash-light, among other gadgets, to highlight the seven issues it helps to combat. How? It's all thanks to niacinamide vitamin B3 to strengthen skin's barrier function; pro-vitamin B5 to moisturise and a vitamn E and C antioxidant complex to battle skin stressors like UV exposure, smoke and grubby city air.

And as we've long said on beaut.ie, if you're on a budget, you can do a lot worse than Olay.  The majority of the range stays as is, but the Total Effects 7-in-1 Day Moisturiser with SPF15,  7-in-1 Night Moisturiser and 7-in-1 Day Moisturiser Fragrance Free have been super-duperised. Best news of all? They're all a cent under €20, at €19.99 a pop.