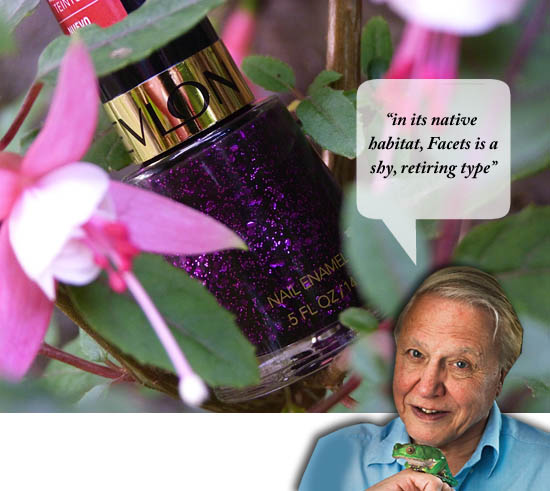 It would only be a slight exaggeration to say that I have spent every waking minute of the last three months daydreaming about Revlon Facets of Fuchsia, €9, in anticipation of its launch. I even attempted a DIY approximation of it to tide me over until its arrival, but finally - FINALLY! - I have in my possession a bottle of the lust-have nail polish of the season.

It wasn't slated to land until October but has quietly been taking up residence on Revlon stands over the last couple of weeks. I'll be honest: when I clapped eyes on Facets of Fuchsia sitting pretty in Boots the other day, I didn't worry too much about release dates or wonder why it was out early.

I snapped up a bottle quick smart and briefly wondered if I should be taking advantage of the Boots three for two offer (running until 26th September) to buy back-up bottles, too. 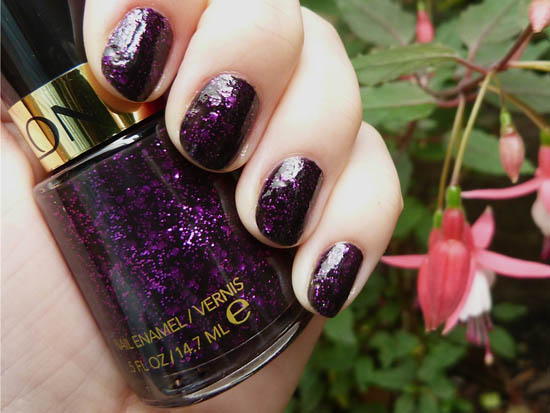 Facets of Fuchsia is a truly gorgeous polish, with large hexagonal paillettes and small square pieces of pinkish purple glitter suspended in a black jelly base, and is being widely hailed as a dupe of Deborah Lippman Bad Romance. The jelly base of Facets of Fuschia might be a slightly more sheer and it might have a higher concentration of glitter particles, but really that's splitting hairs. They're as good as identical, except for the price difference: Revlon's take on things is just half the price of Bad Romance (€18).

So it's good looking and comparatively well priced, but how does Facets of Fuchsia perform outside the bottle? Well, the jelly base is on the thin, watery side because the glitter needs to be visible through it, but that means coverage is a bit crappy. This definitely isn't a one coater. The first coat is actually a bit of a sheer, streaky, brushstroke-filled mess, and I find it really needs three coats to be perfectly opaque as the second isn't quite enough to completely cover all bald spots. 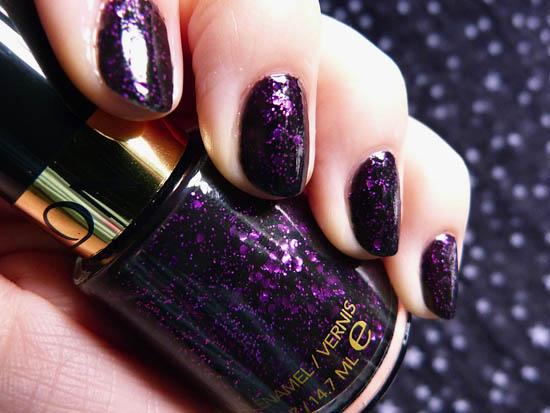 That's a pain in the hoop for two reasons. It takes longer to apply, yes, but it also means that you wind up with an awful lot of glitter on the nail plate. Now, I love me some bling, but too much of it is actually a bad thing where this polish is concerned. Part of the beauty of Facets of Fuchsia is that the glitter is subtle and gives the black base a subtle, sophisticated, lit from within quality, but the glitter build-up caused by multiple coats diminishes that effect. If you encounter similar problems and want to cut down on the glitter payload, try using it over a black creme base to reduce the number of coats needed to emulate the bottle colour. 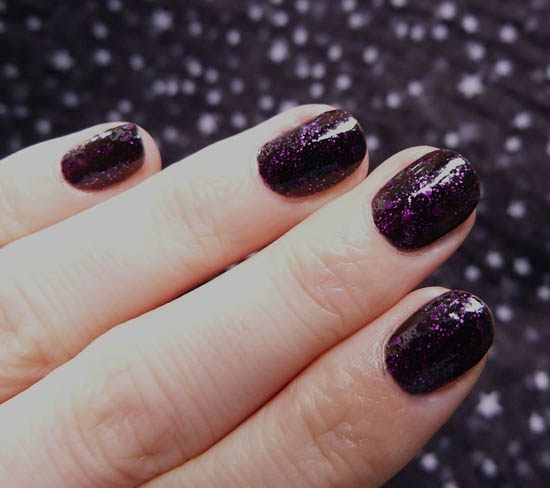 Regardless of how many layers you ultimately end up applying, all the glitter in the mix makes for a predictably uneven result, so a topcoat is a must to eliminate bumpiness and create a smooth finish.

That might sound like a lot of negativity but, despite the application issues, I absolutely love this polish. It looks simply stunning and will, I think, flatter most skintones. It's a bit goth while being very glamorous, it's edgy but not OTT, and it is perfect for autumn/winter.