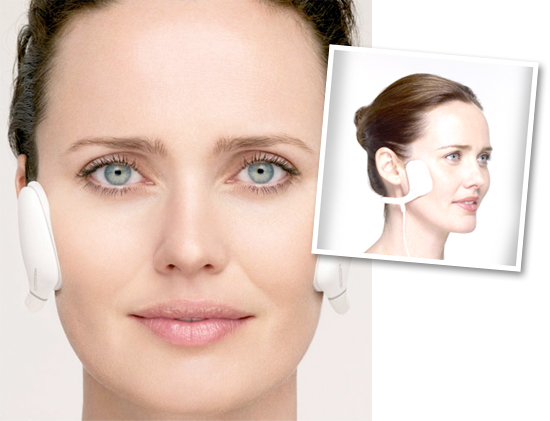 A €300/£300 pricetag hasn't deterred the thousands who are on Harrods waiting list for Slendertone Face, so I was lucky to bag one to try when it launched here - only ten were handed out as press samples. I've been giving mine a whirl and while it's too soon to say whether it's making any radical differences, I must say I do like the concept. Aiming to tone and build the facial muscles using EMS technology (zippy zappy electrical pulses designed to mimic natural muscle movement), it's backed by scientists at NUI Galway, who tested the product and its claims.

The headphone-alike headset is simple and just clamps to your cheeks - it should be positioned to within a fingers width of your ears - and that placement allows it to target the major muscles in the face, working cheeks, mouth and jowls and up to the eyes. You attach your headset yokey to an iPod-alike gizmo that's the controller, and which allows you to select one of three toning programmes which can be used for up to 20 minutes.

You can also target the intensity of the pulses from one to some number I haven't yet discovered, because going up to 25 made me feel like the face was about to be zapped offa me. So Face is customisable, depending on your needs.

It's not painful, but it is weird. And while there's a bit of a learning curve - there are replaceable sticky suckers you have to twiddle with and attach to the underside of the cheek pads to conduct the pulses - but tangle with them once and learn the correct placement of the headset on your face, and then there's actually feck all to do except sit back and watch telly as it goes through its cycle of toning zaps and pings.

As it works, depending on the intensity selected, your face and eyes will twitch. Your boyfriend will burst his hole laughing at you. You will creep up on him and zap it off his arm as he plays Fifa 10 on his Xbox. He will loose the game he is playing and he will shake his head sadly at the things you do for kicks.

In summary, yes, I am enjoying my Slendertone Face mightily. You can bag one for yourself at Brown Thomas for the aforementioned €300, with packs of replacement suckers coming in at €25.