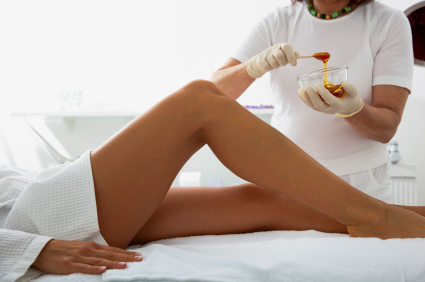 The business of summer defuzzing is a serious one, assuming that you're not quite ready to pull an Emer O’Toole and bare your lush winter coat in public. Waxing is great for long-ish lasting results so it's no surprise that it's a popular pre-holiday depilatory method, but if you're not a waxing regular the whole process, particularly where salon treatments are involved, can be a bit of a mystery.

The idea behind this guide is not to suggest for a split second that we should all run out and wax our nethers bald, but rather to provide a little crash course covering the basics (as well as the confusing terminology) to hopefully help demystify the salon waxing process.

Types of wax
There are two types of wax that are used for in-salon depilation.

Terminology
Half leg/lower leg: Wax to just above the knees. Usually includes toes and feet if required.

Full leg: Everything from tips of toes to tops of thighs.

Basic bikini: A modest tidy-up job, this simply removes hair from outside the knicker line.

Extended bikini/American: Similar to the basic bikini, the extended bikini comes in (and down) a bit further from the edge of the knicker line and hair is removed from the tops of the inner thighs. Good for high cut swimwear and underwear.

G-string/Californian/French/partial Brazilian: A tighter wax, this leaves a vertical strip of hair the width of 2-3 fingers at the front and on the labia. The bum is waxed.

Brazilian: Leaves a vertical strip of hair at the front in your choice of a rectangular or inverted triangle shape. All hair underneath is removed, including from the labia and bum.

Double-dipping: Not a type of wax but a salon technique you'll want to avoid. Read more about it here.

Now steady yourself with a brandy because later on I'll be bringing you  tips on waxing etiquette, the all important question of pain and where I like to go to get deforested!