Diet Diaries: Spud you DON'T like. Is there no place for the potato in modern Irish life? 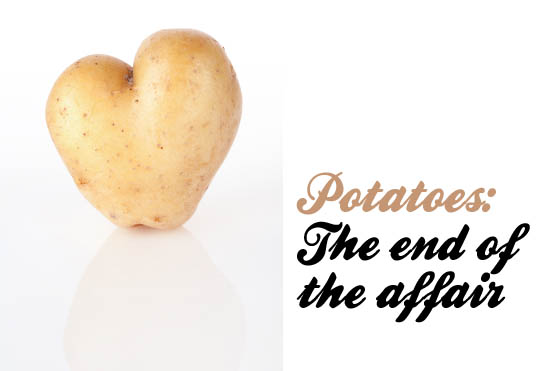 For hundreds of years spuds and being Irish have been almost as synonymous as... well Guinness and being Irish.  Childhood memories of Mammy dinners heaped with boiled potatoes, bangers and tons of mash and Sunday roast potatoes piled high on the plate are the stuff of everyone's past

But now it seems we're turning up our noses at the humbles spud.  Sales of potatoes in Ireland have drastically declined.  There are a number of reasons for this and I know that at least a couple of them apply to me

Reason one: Rice and Pasta
We've replaced the dinner time spud with other forms of carb like rice and pasta.  Dinner in Ireland was quite frankly as boring as hell -  there were exciting dishes like mince and potatoes; chops and potatoes, or boiled chicken and potatoes.  And lets not even get onto offal.  Okay, this was probably in the time of To School Through the Fields and The Country Girls, but you know what I mean.  Being grindingly poor as a nation didn't give us much opportunity to develop a cuisine.

So exciting dinner time treats like rice and pasta didn't face much of a challenge and as if overnight our culinary landscape was transformed by the addition of Spag Bol, Chilli Con Carne and the like.  And we've stuck with the love of rice and pasta ever since

Reason Two: potatoes are fattening
This just isn't true but is something many people regard as fact.  Potatoes are virtually fat free and full of vitamin C, fibre and other Good Things.  Just don't fry them - that's when they become insanely fattening.

Reason Three: Low Carb diets
Atkins Diets and the fear of Carb Face (something made up in LA of course) has meant that all forms of carb have suffered terribly and been downsized from many diets.  Potatoes are virtually seen as the work of Beelzebub in some quarters.

Reason Four: potatoes take too long to cook
Well yes, they do.  And busy lifestyles mean that popping a pack of fresh pasta in a pan of boiling water for a couple of minutes, or the "ping" of the microwave after two minutes signalling your rice is ready, are much more conducive to modern life.  I'm definitely guilty of this one.  After a busy day in work the last thing I want to do is to wait thirty minutes for some spuds to boil.  Microwave potatoes are becoming more common though and they're so handy.  More of this kind of thing please

Are you surprised to hear that potatoes are not so popular any more?  Or do the reasons above make total sense to you?