The Pedi-Spin is by JML:  the people that brought us the ever-popular Ped-Egg and and promises ‘salon beautiful feet in minutes’. So I had quite high hopes for my horrible hooves after a quick spin with this.

Full disclosure – running has made my feet a particularly tough test case for any foot-maintenance product. Seriously, they’re calloused and scaly and just wrong on so many levels. 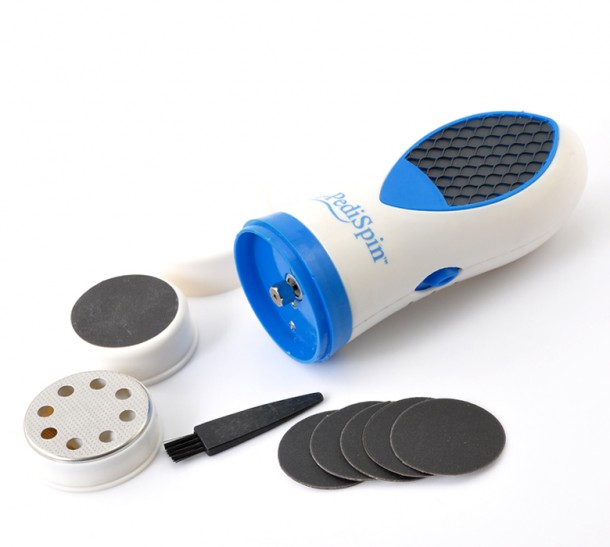 The first stumbling block for me with the Pedi – Spin was the fact that it needs four AA batteries. FOUR. I haven’t had a device that required that much power since my ghetto blaster in the mid 80's. And they're not included in the pack, which includes with a filing plate, a wee little brush for cleaning the filing pate and a TWELVE finishing heads to smooth out your newly soft feet.

Twelve finishing heads and no batteries! Where's the logic? Gah!

Anyway the chief problem with Pedi-Spin is the spin part. MAN that's some weak spinning.

Once I’d begged borrowed and stolen the four batteries I was expecting a very powerful foot-filing action. I was sorely disappointed, the spin was really weak and disappointing and it stopped completely if the SLIGHTEST pressure was applied. In the instructions it does say you have to apply light continuous pressure in a circular motion and I did give that a go, but it just wasn't working for me and my calloused hooves.

If you had all day to sit there applying the worlds lightest pressure to your trotter I imagine you MIGHT see some results. But really who has the time? Life is short! After about 15 minutes I just gave up. The idea of this is good, but the spin itself is so god-awfully disappointing.

It’s around €17.95, but I’ll be consigning the Pedi-Spin to the bin immediately.  You'd be MUCH better off with the Ped-Egg or the Micro-Pedi.

Has anyone else tried this out? And did you have any more success than me?

How to have your neglected feet sandal-ready this summer

Poll: Have we found the most ridiculous beauty trend of 2016?

We need your vote more than Enda

Fancy Feet: Keep Your Toes Sandal-Ready All Year Round

Keep your feet in fine fettle all year round!

High heels are beautiful - but dangerous.

Our hard working hooves need a little TLC too - and we'll be taking our socks off soon!