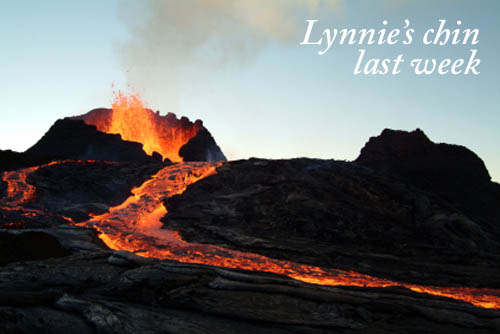 Apart from one massive hormonal underskin spot that appears at precisely the same time every month before sinking back to the depths from whence it came, I don't usually suffer with spots. Blackheads and whiteheads are a different story, and I'm permanently battling them thanks to my oily t-zone, but over the last fortnight a trio of enormous pustular zits saw fit to rear their ugly heads on my chin.

I was dismayed when the first one started to come up on day two of my holidays, then alarmed by its exponential growth over the course of a few hours. Repeat applications of the salicylic acid-based Vichy Normaderm Anti-Blemish treatment that I'd somehow thought of throwing in my case had no impact on it, and unfortunately I didn't have time to do anything other than conceal it before we went for dinner that evening.

At least, I thought I'd concealed it ... until Himself said "Oh my GOD! Do you know you've a huge spot on your chin?!" as we were en route to the restaurant.

That's always the best time to be told that something's amiss, isn't it? When there's absolutely fecking nothing you can do about it?

Now, being away from home and my trusted treatment products as festering spots started to colonise my chin was bad enough, but I was carless in Disneyland; I might as well have been on Mars as far as trying to get to a pharmacy was concerned. I tried icing them to no avail. And then, because desperate times call for desperate measures, I went old school and tried soap and then toothpaste and then aftershave in an attempt to dry out the buggers.

Hey. Don't judge me. You weren't there to see the horrors of these throbbing, pus-filled (sorry), yellow-headed (sorry!) numbers; I think they had roots.

I'd like to tell you that I found a magic home hotel remedy that gave them the shove, but the truth is that after a couple of days of toughing it out like an absolute saint and not touching them, I just couldn't bear the sight of their disgusting and fecking massive protruding heads any longer. I took a long, hot shower to open the pores, used a hot facecloth as a compress on the affected area to draw them right up to the surface, wrapped my clean fingers in tissue and used the pads of my fingertips in a rolling down and up motion to commit the number one spot "don't".

Yep. I - verrry gently - squeezed the pus out.

I was careful to stop short of drawing blood, and Himself, who is an anti-squeezing Nazi, couldn't tell what I'd been up to when I emerged, victorious, from the bathroom: he thought they had just disappeared in the shower.

Unfortunately, when the third one arrived I attacked it prematurely and made an unholy mess of things, and now have a dirty big scab on my chin to show for my troubles.

Skin Hero: why you need to be using rosehip oil

How to stop picking at spots (because you know you should)

Can face mapping help solve the mysteries of breakouts?

2 easy MUA tricks for concealing spots that anyone can do

The Skin Nerd’s Tips for Zapping Spots in No Time