Is Giselle Bundchen the most annoying pain in the arse ever? Suncream is poison she prononounces 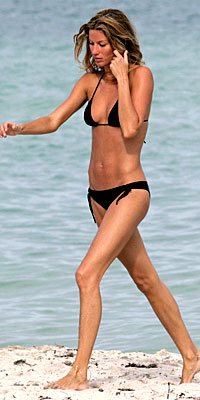 Nice tan. Did you get that before 8am?

Giselle Bundchen, beautiful supermodel with a body to die for, kind of ruins the whole illusion of perfection every time she opens her lipglossed gob.

When she had her baby she managed to enrage every single women on the planet who has ever had a baby. The whole world thought that it was the most excruciating pain and only advances in modern medicine have ensured that women have their pain mitigated by drugs. But Giselle knew better and was quick to say that it doesn't hurt at all.

Not a bit. Meditation, yoga and a water birth meant Giselle popped the baby out in a trice and wondered loudly what everyone else had been whinging about.

Obviously they must have been making it up.

Then when Giselle managed to breastfeed effortlessly, she declared that there should be a law passed to say that all women should have to breastfeed until the baby was six months old. Some women have terrible difficulty with this though - what about them?

Obviously they are making it up. 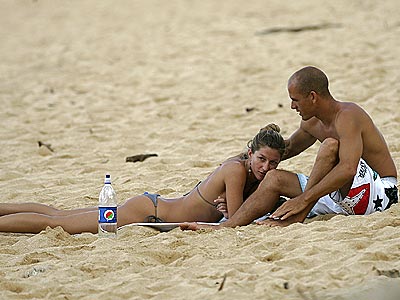 A relaxing day on the beach. Ending at 8am

Now to add to her catalogue of idiocy she has declared that suncream is poison. It's so full of chemicals that she would never apply it to her skin. But this message led to confusion. Giselle is permatanned so where was she getting her tan? Was she going out without sunscreen? If so, that is terribly dangerous and cancer societies were appalled that she was sending out this message.

"I don't go out in the sun after 8am" said Giselle snootily in response. "The cancer causing rays are minimal before then"

So all of her sun bathing is done before 8am?

Or could it be that Giselle has just launched her own natural skin care range and is doing a bit of scaremongering about the chemicals in other products? She's now pretending it was all a translation error and she didn't really say that at at all.

Obviously they were making it up.

Giselle: you are full of shit. Now just shut up please before you say anything more ridiculous.