Loyalty Cards: The Good, The Bad, and the Downright Bonkers 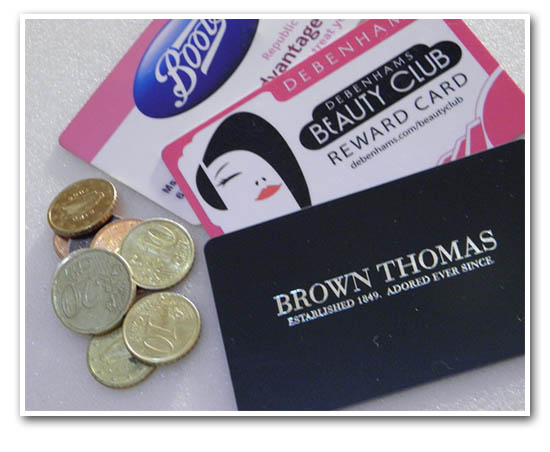 The bottom of my handbag is a sea of bus tickets, lip-balms and, mostly, loyalty cards. If a store has a loyalty scheme, you can bet your No7 voucher that I'm a part of it. That you can collect points as you spend really lessens that guilty post-splurge feeling. Sure it's nearly as good as saving, isn't it? I'm probably a marketing company's dream – rarely spending money in shops that don't have a rewards system.

If I feel a sniffle coming on, I will bypass a thousand chemists to get my Kleenex in Boots, such is my love for their advantage card. You get four cent per euro spent, though this is often doubled on special points days or with the vouchers you get in the post. If you aren't getting your rewards coupons and discounts, hound the customer service! They'll fob you off with something about not being able to supply everyone, but don't give up.

I recently bought my sister's Christmas present with my patiently saved points. My only bug-bear is that you can't pay in part cash, part points. If, like me, you're committee to only buying your toiletries in Boots, it shouldn't be long until you have enough to treat yourself.

It's not uncommon to see women realising that they don't have their cards and breaking into a cold sweat, grasping the hands of the sales assistants, begging for the points to be put on a receipt. Boots are happy to do this, which is great if you're as forgetful as I am.

Brown Thomas have two different loyalty cards, the Black and the Platinum Black. Make yourself comfortable and put the kettle on, their terms and conditions make Ulysses seem like a light read.

With the Black card, you get a point per euro. The value of each point is one cent, so you'd have to spend €100 to get a euro back. All of the points earned in 2011 remain valid until 31st May 2012, and points earned during 2012, from 1st January will remain valid until 31st May 2013. Customers no longer need to wait for a redemption period, as they did in the past. Black cardholders also get triple points three days before and after their birthday, email updates on sales and invitations to card-holder only events. There's also a new Delights menu from which you can choose rewards for varying points amounts - check them out here.

If you're still living in 2006 and happen to be dropping €5000 per year, you get the Platinum Black card. This entitles you to two points per euro spent, all of the aforementioned perks, plus a freebie drink when order a main in any of their eateries (an enticement to spend €5000 in one place if ever there was one) and can redeem your points every day.

Then again, if you have that much much money to spend in one shop, would you really need to collect points? I imagine you'd be too busy stroking your mink stoles and eating the feet of endangered animals.

Debenhams offer one point per euro on any purchase and three per euro when you spend over €30. If you spend €50, you get a fiver back in points and if you spend €100, you get a tenner. It's not as generous as my beloved Boots card, but, if there are brands that are exclusive to Debenhams, I do bring my card along and definitely notice the balance rising. Like the headache that is the Brown Thomas card, Debenhams points will get wiped if you don't use them in 12 months.

I'm in the process of trying to be a proper lady with a skin-care wardrobe, so have been frequenting the Origins counter in Arnotts for some time now. You get a decent three points per euro and can redeem them at any time. You have to have 500 points before you can redeem them. Again, don't try to hold them in your account for over 12 months, they will be wiped!

I might not be as hard-core as those Americans and their coupon collection, but I'm still a divil for letting my loyalty cards dictate my shopping trips. Is anyone as aggressive in their saving? What have you treated yourself to?

5 perfumes that will pretty up your dresser (and make you smells nice, obvs.)