The return of the poodle perm: Is it back? Really? 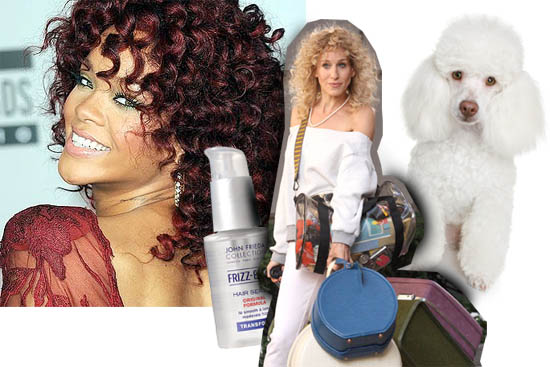 It was Rihanna who put the hairdo most of us would consider a hairdon't on my beauty radar a little while ago: she sported an auburn bobbed poodle perm at the American Music Awards, which were held at the end of November.

Not an obvious choice, but then this is the girl who favours scarily long, pointed, take-the-eye-clear-outta-yer-head-so-they-would talons and isn't afraid of super bright pink eyeshadow, so maybe it wasn't an entirely surprising one.

What has been surprising me - a lot - is the number of times I've seen the look In Real Life! Last week and across the weekend, I spotted blondes, brunettes and redheads alike with poodle perms all over the shop.

And they weren't actually poodles, like. They were young, otherwise completely normal-seeming women.

I don't know if it's been brought on by trend-starter Rihanna - remember, this is the lady who has launched a thousand copycat undercuts and asymmetrical bobs and quiffs - or the launch of SATC2 on DVD - is it conceivable that people think Carrie's frizzy flashback 'do is a, y'know, "do"? - but I spy a micro trend. And I don't like it one little bit.

'Sleb pix from Getty and louloumagazine.com