No laces, no blisters, easy in and out. These are the best shoes for a weekend of city exploration

I'm going to New York in a couple of weeks and don't be surprised if I don't come back. I may get lost in the American Dream, or I may be mugged and murdered in the frankly dodge sounding Brooklyn where I'm staying. Anyway, it's my first time taking a chomp outta the Big Apple, and therefore it's A Big Deal.

As much as I don't want to get mugged and/or murdered, my biggest fear is looking like an out of towner. New York is one of the most fashionable places on earth and is home to some of the most stylish people, and I don't want to on the wrong side of a Carrie Bradshaw scrunchie moment.

Choosing my New York tourist-but-please-don't-think-I'm-a-tourist wardrobe is giving me major anxiety, so I'm starting small. From the feet up.

I am packing as light as possible, which only leaves room for a couple of pairs of shoes. Because I know I'll be spending the majority of my time in the city on foot, I have no other option than to go with comfortable and flat. There's no way I'm wearing actual runners, like the sporty kind, when I'm not doing sport, even though they're the most sensible choice.

My ballet flats are also out because they're the old ones from Topshop that actually looked like ballet slippers and were made from the same material. I don't want city juice all over them, thank you very much.

I've done some research, and the best type of shoe for a city break situation is the classic Vans type slip on. They're perf for quite a few reasons. You can slip in and out of them easy as pie, so they're good for the airport. They will suit many outfits, including dresses. If you wear them nonchalantly enough, you can wear them out. Eh, and they're flat so won't ruin your feet when you're climbing up the Statue of Liberty or whatever.

I'm getting these ones from Topshop because the material seems shiny enough that water won't wreak them if it rains / if an angry New Yorker spits on them because I'm walking too slow. 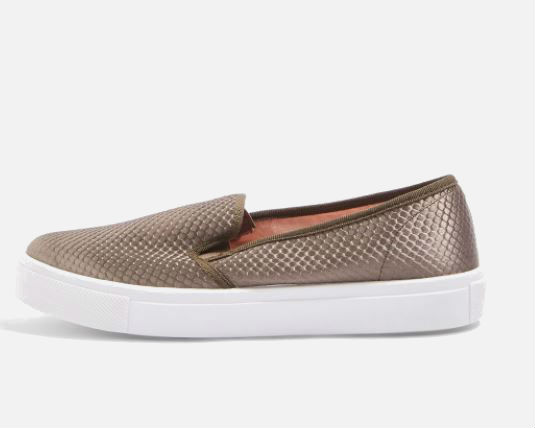 They're easy and comfortable and relatively cool so, yeah, leave those lace-ups and sliders behind.

5 brilliant beauty stocking fillers that are all under €5

Should you or shouldn't you by these new season shoes? (Ah, yeah you should)