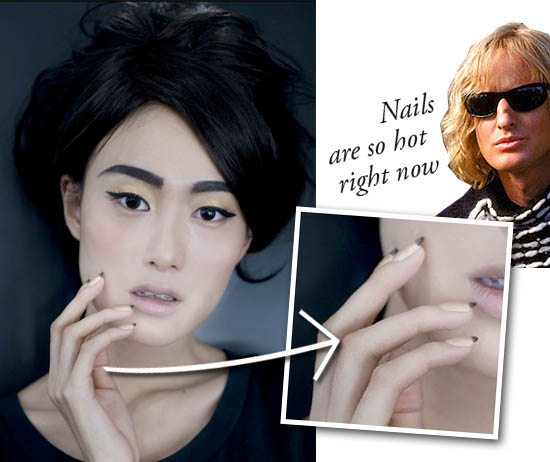 For the last few days, I've been rocking two-tone fingernails inspired by Kirstie's recent blinging DIY manicure. It seems we're not the only ones liking a twist on the bog standard French for SS10, though: at Chanel's Paris-Shanghai show, a yellow-gold nail was topped with contrasting black tips for a decidedly non-saccharine take on the classic mani. This kind of reverse French makes a great alternative to the pastels and metallics that have been dominating the nail scene of late.

Not to mention that it would be a great look for anyone who has to pick stones in the upper field as part of their daily routine. Hides the dirt brilliantly, d'you see. 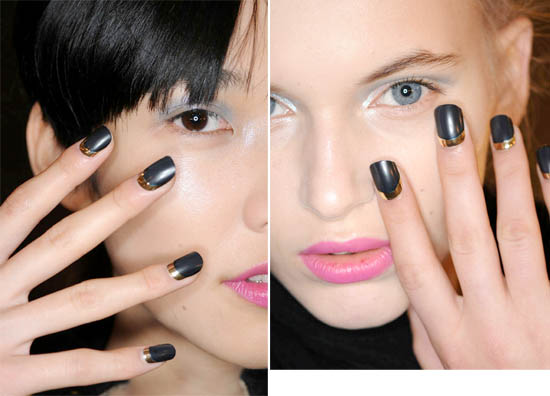 The other not-quite-full-blown-nail-art two-tone look that's caught my eye lately is a version of the half-moon mani. Rather than protruding into the nail bed in a "D" shape, the contrasting colour at the cuticle wraps around in a "C" shape. I've spotted it on the Ruffian catwalk at New York Fashion Week, where the CND team created the crescent moon using gold and silver foils and then added two coats of navy (CND's Inkwell, fact fanz) leaving that crescent at the base exposed.