His father is no stranger to body art so it should come as little surprise that Brooklyn Beckham decided to get his first tattoo over the weekend.

However his choice of tattoo has raised the ire of some of his Instagram followers.

The 18 year old got a portrait of a Native American figure wearing a feathered headdress on his arm. The work was done by tattoo artist, Mark Mahoney, who Brooklyn wrote is a friend of David's.

Many of his followers were less than thrilled with the fact that he got Native American figure tattoo and some even went as far as to accuse him of cultural appropriation. 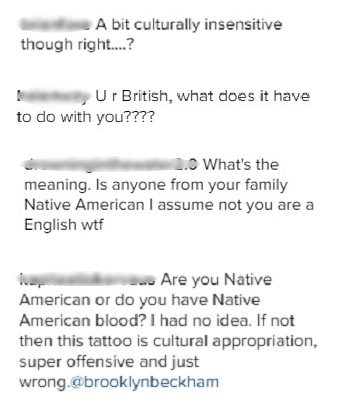 Chloe Grace Moretz and Brooklyn Beckham have reportedly split up

"We're in a relationship"

Possibly one for the 21st montage...

David Beckham's Insta post for Brooklyn is so lovely