As part of the celebrations around Facebook's upcoming twelfth birthday on February fourth, 'Facebook stories' contacted individuals and groups around the world they wished to highlight as part of celebrating the network's twelve years of connecting people.

One such group is "Girl Crew" which is a worldwide community of women that began in Dublin. As described on their website, Girl Crew started when founder Elva Carri really wanted to go out one evening but none of her mates were available. Rather than give in to a night with Ryan Tubridy, Carri decided to go looking for people to go dancing with on Tinder. She switched her profile to 'male' and changed her profile photo to the image below. 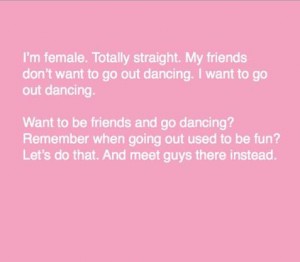 Carri thought that she might get maybe two or three responses. Instead, she had over a hundred in two days. Since then, the concept has grown into small groups of women all over the world who want to just meet up and hang out – whether it’s for gigs, coffees, nights out dancing, running, eating or whatever.

The group started with 100 Dublin members and now has over 22,000 in over forty cities worldwide.

Facebook will be filming Dublin's Girl Crew this weekend before flying Carri and other founding members, Aine Mulloy and Pamela Newenham over to California for a party with other featured friends and user groups.

Let's hear it for the girls! Any of you a Girl Crew member?