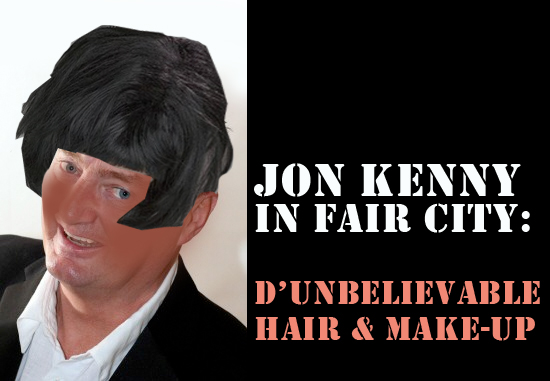 Watching Fair City last night, I spit my Berlin-bought Toffifee (yum!) out of my mouth in surprise as new character Crazy Chester Legend entered stage left. Played by D'Unbelievable Jon Kenny, RTE appear to have gotten him on board because he came with his own wig, makeup and wardrobe, evidently left over from his days of playing a demented farmer on the stages of middle Ireland.

Sure you know how it is, RTE are feeling the pinch what with all the cuts, and I suppose Jon's brown panstick and black fright wig saved them a few quid in wardrobe and makeup costs. They didn't seem to have a need for the brown shopcoat. Funny that.

Debuting last night, by the end of the week Crazy Chester will be ending up in a sauna with Yvonne and Paul (an episode to miss, I fervently feel) but it doesn't seem that his stint went all that well. "I think I'm gone out of it now because they haven't called me since," he mournfully told the Herald.

Oh dear. What a shame.