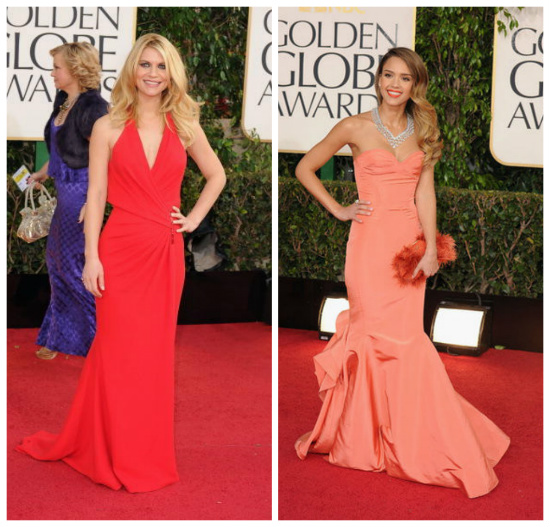 The glitz and glamour that is award season for 2013 got underway last night as the stars strut their stuff down the Golden Globes red carpet. More relaxed than the Oscars, but slightly more classy than an MTV awards show, the stars came out in force donning their finest gowns in the hopes to win the fashion stakes and a coveted statue. A big congratulations goes to last nights Golden Globe Winners, but the reason I stayed up until the wee hours of the morning was to have a good gander at the fashion and beauty looks. And I have to say this year, many of the looks were, considering it is award season, rather understated. We had a few splashes of colour thanks to Taylor Swift in a stunning dark plum gown by Donna Karen, Jessica Chastain in a sea blue dress by Calvin Klein and Jessica Alba's incredible melon silk-faille trumpet gown by Oscar de la Renta (check out the amazing clutch!), but a good few of the gowns were either black or nude which follows on from last years Globe trend when many starlets also wore neutral colours. Obviously I couldn't go through the whole lot, but here are some highlights: 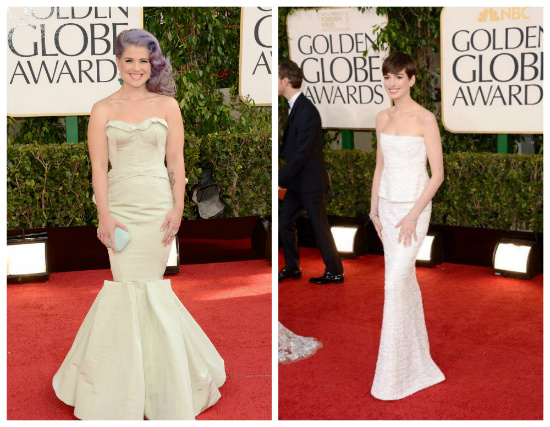 The fashion hits for me included Claire Danes in her spectacular red Versace dress, Nicole Kidman in her black Alexander McQueen dress (her hair and makeup were also stunning), Amanda Seyfried in her blush-colored Givenchy gown, Anne Hathaway's white Chanel couture dress and  Naomi Watts in a burgundy Zac Posen gown. Kelly Osbourne also rocked a mint green Zac Posen (and I was glad to see she kept the fabulous hair colour) while the beautiful Megan Fox kept it simple in an elegant nude Dolce and Gabbana dress. 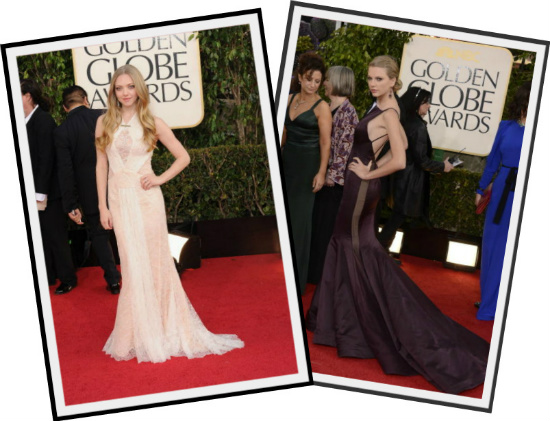 I also loved actress Julianne Hough's look. The 24-year-old actress rocked a Monique Lhuillier gown, Jerome Rousseau shoes, Daniella Villegas jewels, and a Salvatore Ferregamo clutch. Her nails and rocking hairstyle also really worked, and she has the super cute Ryan Seacrest as a boyfriend — lucky thing! In terms of the beauty looks and hair styles, they were kept nicely minimal. Most opted for a soft up do like a loose pony, and some went for side swept hair. Much of the down dos were soft and wavy; there were few harsh styles. In terms of makeup, this was much the same. There were mostly soft pinks and eye shadows, (some with outlined eyes), and a few opted for a spot of colourful lippy. I think the beauty looks were gorgeously subtle and all the ladies looked radiant - it's sickening when you think about it! Also, all the jewelry worn was absolutely incredible; I'd kill for Kelly O's stunning emerald earrings in particular.

For those stunners above that got it so right, unfortunately these ladies below got it very, very wrong. Jennifer Lawrence's red Dior gown just didn't do it for me. The top of it doesn't do anything for her and I was very unimpressed with the hair overall, it looked far too flat. I don't know what Halle Berry was thinking with the Versace dress, the colour scheme is quite nice, but I really dislike the side slit. I was disappointed with her look - she usually gets it so right! I adore Debra Messing, but I just don't think her Donna Karan  Resort 2013 dress flatters her at all, particularly at the top. Her hair and makeup were flawless though. I'm not a Nicole Richie fan, but will say when she gets it right. Unfortunately, I don't think she did this time around. I don't think the colour of her Naeem Khan gown or the matching eye shadow really did much for her, but her hair was fabulous. 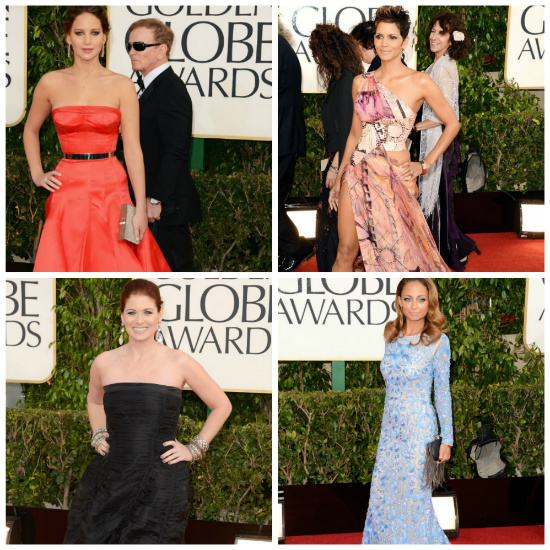 Lucy Liu's Carolina Herrera  dress (it looked a little like a table cloth, though the colour's complimented her skin tone very well), and Julianne Moore's Tom Ford weren't great either, but they were far the worst of the bunch. Overall I thought the fashion, hair and beauty looks were fabulous this year and  there were more hits than misses; the majority of dresses and looks were absolutely stunning.

What did you think of the gowns and beauty looks? Which were your favs? Tell us in the comments below!